Buried in a New York Times article today about friction between President Obama and Prime Minister Netanyahu  is a phrase that the newspaper has never used before:

Famously, many of those conversations have been deeply uncomfortable. The two leaders have often clashed on Israel’s determination to build new settlements, which Mr. Obama viewed as a way to sabotage peace talks. Mr. Netanyahu was accused of lecturing Mr. Obama in front of the cameras in the Oval Office during an angry conversation in May 2011, after Mr. Obama suggested that the 1967 borders with Palestine should be the starting point for peace negotiations. Later that year, after former President Nicolas Sarkozy of France complained in front of an open microphone that Mr. Netanyahu was “a liar,” Mr. Obama said, “You’re fed up with him, but I have to deal with him even more often than you.”

Amazingly, there are three errors in that four-word phrase.
The NYT has used the false phrase "1967 borders" or "pre-1967 borders" many times, referring to the 1949 armistice lines as "borders" even as early as June 1967 itself. 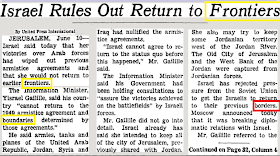 But this is the first time they are implying that the land that had been illegally annexed by Jordan in 1949 was considered a separate "Palestine" in 1967.

This sort of thing is not an accident. The New York Times has a style guide - the current edition is not available to the public, but you can preview the 2002 edition here - where the usage of words and phrases is meticulously defined and refined over the years. When the NYT decides to make up a nonsensical phrase like this one, it means that they are changing their style rules to subtly push the lie that every inch beyond the 1949 armistice lines belongs to an entity, that is at least 47 years old, called "Palestine."

Which means that the "newspaper of record" is willing to influence common usage of American English itself to push a specifically political agenda. Which just happens to be anti-Israel.

UPDATE: The NYT silently changed the phrase after I wrote this.
Elder of Ziyon at Friday, January 23, 2015
‹
›
Home
View web version