Iran offers its weapons to any Muslim country to fight Israel 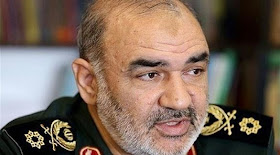 Dozens of Arabic media outlets are quoting FARS News saying that the deputy commander of Iran's Revolutionary Guards, Brigadier General Hossein Salami, stressed that "all the targets of the Zionist entity are in the range of our missiles."

He then added, "All our [military] capabilities are at the disposal of the Islamic world."

Salami said "Our enemies are provoking division in the Islamic world ... They are trying to break our unity and [force us to increase] self-draining energies of the Islamic world rather than direct [this energy] to face colonialism and arrogance."

Saudi Arabia and the other Sunni Gulf states should take him up on the offer of free weapons. It might come in handy for them. He just might not like the target so much.

This was just one of a series of threats that Iranian officials hurled at Israel this week. This FARS article has a roundup with a hilarious last sentence:

“This action (the Israeli attack) was the reflection of numerous defeats that both Americans and Israelis have suffered in their current strategies,” Lieutenant Commander of the Islamic Revolution Guards Corps (IRGC) Brigadier General Hossein Salami said on Thursday.

He said their failure in Syria, Iraq, Lebanon, Yemen and Bahrain made them understand that their existence is on the decline.

“They have seen IRGC’s reactions before, and (therefore) they are worried, and they will witness destructive thunderbolts in practice,” he said.

“They (Israeli officials) should be waiting for crushing responses,” Salami said.

On Tuesday, Commander of the IRGC Major General Mohammad Ali Jafari warned Tel Aviv of the devastating response of the regional resistance movements to Israel.

“The IRGC will remain steadfast on the path to the collapse of the Zionist regime of Israel through its continued support for the Lebanese and Palestinian combatants, but this time it supports will be on a scale larger than its supports during the 33-day and 51-day wars against the Israeli army,” General Jafari said in a message released on the occasion of the martyrdom of Allahdadi.

The Iranian top commander said resistance groups in the region would soon give a crushing response to Israel's Sunday raid.

“The Zionists must wait for the devastating thunderbolts of the anti-Israel resistance groups in the region," the Iranian commander warned.

Also, Deputy Chief of Staff of the Iranian Armed Forces for Logistics Major General Mostafa Izadi underlined on Wednesday that the Israelis are and should be deeply worried about the crushing response that they will receive for killing several Hezbollah members and the Iranian military adviser in Syria.

"They thought that they will a get good result, but now they know that they will receive a crushing response and because fear and fright is intermingled with their nature, they make these remarks (that they weren’t aware of the veteran Iranian commander's presence among those martyred in Israeli air raid in Syria on Sunday). Muslim fighters will take a firm and powerful revenge for the blood of these martyrs," Izadi said in Tehran.

Izadi said that the assassination occurred in Syria which is not directly in war with Israel and their attack was carried out on purpose "and the Zionists' remarks are only desperate propaganda".

He also stressed that Iran merely plays an advisory role in Syria.