FAIR - Fairness & Accuracy In Reporting - issued a report by Nora Lester Murad that claims that books for toddlers and youngsters that introduce kids to Israel are pretty much racist against Palestinians, because - they aren't about Palestinians.
However, Murad's critique exposes her own disdain for Arabs who live in Israel as well as her own hate for Israeli Jews.
Even though the books aren't about Palestinians, and aren't meant to be, she says that they"erase" Palestinians.
First, Murad claims that they erase through "appropriation:" 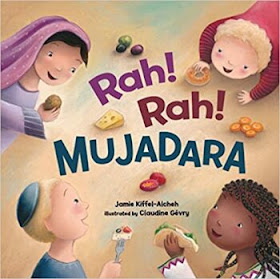 Rah! Rah! Mujadara!, for example, is a 12-page board book for ages 1–4 that has an attractive tagline: “Everybody likes hummus, but that’s just one of the great variety of foods found in Israel among its diverse cultures.”
There’s a subtlety in that tagline that may be lost on some. While diversity is acknowledged, it is represented only within the Israeli sphere, without its own history and separate identity. This is a political position that  jibes with Israel’s intentional deployment of the term “Israeli Arabs” to refer to Palestinians with Israeli citizenship, whom Israel wants to incorporate as an Israeli minority, fragmenting them from the larger Palestinian community and from their national identity.

To progressives, referring to someone in ways that they object to - say, by using the wrong pronoun - is an unforgivable crime. But only a small percentage of Israeli Arabs refer to themselves as "Palestinian." According to a 2020 poll from  Jewish People Policy Institute, only 7% referred to themselves as "Palestinian" while 74% referred to themselves as "Arab Israeli" or simply "Israeli."
FAIR is showing great disrespect to the people they are claiming to be defending from this book. And the simple children's book is far more accurate in its depiction of Arabs in Israel than FAIR is.
The critique then veers into the absurd:

Newbies to the the Israeli/Palestinian narrative war may also not realize that food is an active battleground. Palestinians consider Israel’s claiming of hummus and falafel, among other foods, to be cultural appropriation.
Palestinians, therefore, are likely to consider both the people and the food appropriated  when the same [Muslim] girl is featured behind the text:
Blow, slow.
Taste. Whoa!
Brown fa-LA-fel,
big green mouthful!

Since the state of Israel is not even 75 years old, any food with a longer pedigree must have been originated by someone else. But while Kar-Ben Publishing is surely aware of this contention, they either choose to ignore it or intentionally intend to steer readers towards the Israeli narrative—by hiding the Palestinian one.

But does the book say that falafel is an Israeli-created dish, or does it say that it is a dish that Israeli citizens of all backgrounds enjoy? Clearly it is the latter - "the great variety of foods found in Israel among its diverse cultures." It mentions bagels too - does anyone claim that they are Israeli? Other foods in the book are meant to highlight the different cultures that come together in Israeli society: nowhere does it claim that malawach, mujadara, hummus, or bourekas were created by Israelis except in the fevered imagination of Nora Lester Murad.

Murad is apparently opposed to kids from different backgrounds finding things in common that they like from different cultures. This hardly seems progressive.
Murad then says that books about Israel that show the Dome of the Rock are "erasure through deception" because, she claims, "east Jerusalem" is not part of Israel. However, Israel disagrees, and so do many international jurists. To Jews, the idea of an Israel without the holy places is anathema and extraordinarily offensive.  There is no deception there - people who say that all of Jerusalem is part of Israel have that right.
But FAIR doesn't recognize that right. We must all believe as they do, or we are racists. So tolerant!
The next "erasure" is "Erasure through both-sidesism." Yes, books about Israel that go out of their way to show Arab Israelis are awful, too - and her main target is, believe it or not, Sesame Street.

Welcome to Israel With Sesame Street (Christy Peterson, Lerner Publishing, 2021)...[has a] “both sides” approach, starting by teaching children how to say hello in both Hebrew and Arabic (pages 4–5).  This “both sides” approach makes a nice visual while hiding Israel’s disrespect for Arabic and Arabic speakers, which is clear in the fact that Arabic had been an official language of Israel until it was officially downgraded in the 2018 Jewish Nation State Law.

Of course, Murad pointedly doesn't mention that the use of Arabic in government documents and in the public sphere is still mandated under Israeli law. Israel still supports and funds its Arabic-language schools. There is no disrespect in reality. But why let the facts get in the way of anti-Israel soundbites?

Presenting “both sides” is a device used to appear neutral, which conjures a sense of objectivity and truth. It is also a way to stake a claim to antiracism and respect. For example, page 11 says that Jerusalem is “special to people of many religions,” over a  photo of Palestinian school girls, some wearing the Muslim hijab.
But presenting Palestinians only as linguistic and religious minorities of Israel, and not as a national group in and of itself, is an Israeli narrative tactic that dehumanizes  Palestinians and undermines readers’ ability to understand Israel. While appearing respectful of diversity, the text and photo cleverly omit that Israel is an explicitly, self-declared Jewish state, that enshrines Jewish supremacy over non-Jews (and the corresponding inequality of Palestinians) by saying, in law, that only Jews have the right to self-determination.

A book for children that celebrates Israel's diversity is regarded as flawed because it should show what Murad declares to be the truth, that Israel is a racist state that doesn't give its Arab citizens equal rights.
This is all a lie, of course. The same poll I mentioned above shows that virtually the same percentage of non-Jews as Jews feel comfortable being themselves as Israeli citizens. Most Arab citizens of Israel are proud to be Israelis - but Murad the racist wants them to be considered part of a different nation that the vast majority want little or nothing to do with. The bigotry is in Murad's head and in her poison pen, not in the reality of Israel's non-Jewish citizens.
And by the way, virtually every Arab state declares itself to be an Arab state in their constitutions. By Murad's logic, they are all enforcing Arab supremacy. Does anyone think FAIR will ever mention that?
In Murad's twisted mind, Israel is by definition racist, so any children's book that doesn't highlight how terrible Israel is must be guilty of racism as well. The most bizarre part of her argument is that while it is obvious to all that children's books are meant to teach tolerance, which these books are doing, she is against it. Murad is the racist. Her arguments are as racist as those of a white supremacist upset at American schoolbooks that show white children playing with children of color without mentioning comparative crime rates for different groups.
Finally, Murad freaks out over a map in the Sesame Street book: 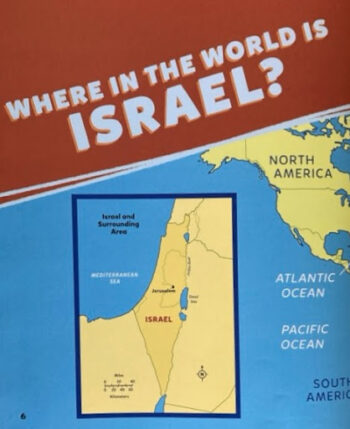 The 1949 armistice lines are clearly drawn, and Israel is only shown inside those lines. Egypt, Jordan and Syria are not named. But Murad looks hard to find bias, and of course she succeeds:

Page 6 of Welcome to Israel With Sesame Street incorrectly displays a map of Israel (“and Surrounding Area”) including the West Bank and Gaza Strip in the same shade of yellow. The outlines of the occupied Palestinian territory are visible but not labeled.

This is her entire argument - the yellow on the map of the territories is slightly different than the yellow of other countries. The actual lines that represent borders, prominently displayed, are meaningless to Murad's bizarre brain - the shade of yellow is offensive.
Hilariously, she sent this litany of paranoid complaints to Sesame Workshop, and they properly ignored her:

Welcome to Israel With Sesame Street, however, is not harmless. It uses subtle messages to contribute to erasure and distortion of Palestinians, which should cause concern among people who care about the educational reputation of the brand. Unfortunately, Sesame Workshop failed to respond to my several inquiries about this book.

Maybe because if she was honestly being as fair as FAIR pretends to be, she would realize that every single one of her complaints is baseless.
It would be amusing to see the same methodology used for children's books about "Palestine." Do they even mention or show pictures of Jews? Do they admit that Jews have the right to live in their historic homeland? Or are Jews not mentioned at best, and called "sons of apes and pigs" at worst?
If FAIR was fair, they would have a Zionist Jew do the exact same type of analysis on books pushing the Palestinian narrative, and see how they fare. Like the alphabet book that says "I is for Intifada." How are Jews represented there? How do they represent the emotional Jewish ties to Jerusalem? How are the feelings of millions of Jews taken into account?
Which side actually tries for coexistence, and which side wants to see the other be ethnically cleansed in the books meant for children?
The books being critiqued by her show smiling Arab children, some in hijabs. Find me a single children's book about Palestine that shows a smiling child in a yarmulke or tzitzit.
Just one.
That is the comparison that needs to be made to see which side is the side of progressiveness and tolerance, and which side is both implicitly and explicitly antisemitic.
For example, this drawing for Palestinian children contrasting Arabs and Jews is not exactly sending  tolerant message. Yet I suspect it is a message that Murad wholeheartedly endorses all children should be exposed to.. 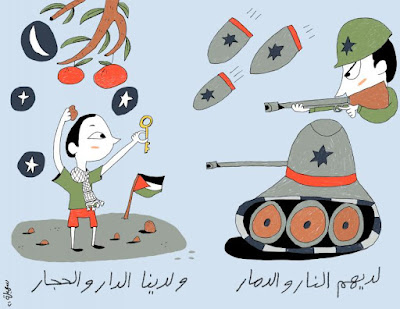 Pro-Israel books go out of their way to teach tolerance. Pro-Palestinian books do the opposite. FAIR promotes the former as racist and doesn't want you to look at the latter.
FAIR isn't fair, and this article is exhibit A.
Elder of Ziyon at Monday, October 03, 2022
‹
›
Home
View web version