By Real Jerusalem Streets
The reported news that Booking.com was to put a "warning" on Jewish-owned property rentals in Judea and Samaria listed on their website spurred a visit to the Dead Sea to see. 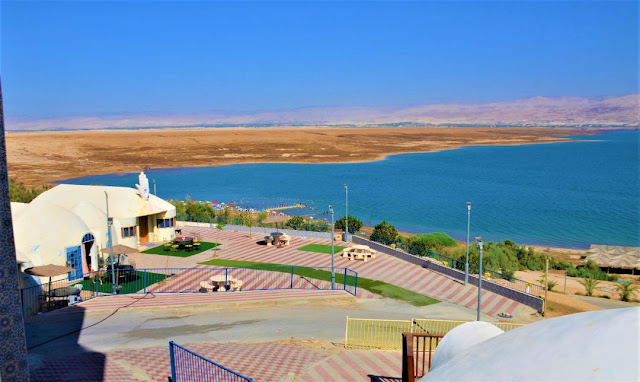 Leaving Jerusalem for the half-hour drive to the northern part of the shrinking Dead Sea, it's hard to miss the Bedouin encampments which have multiplied in the desert along the road. 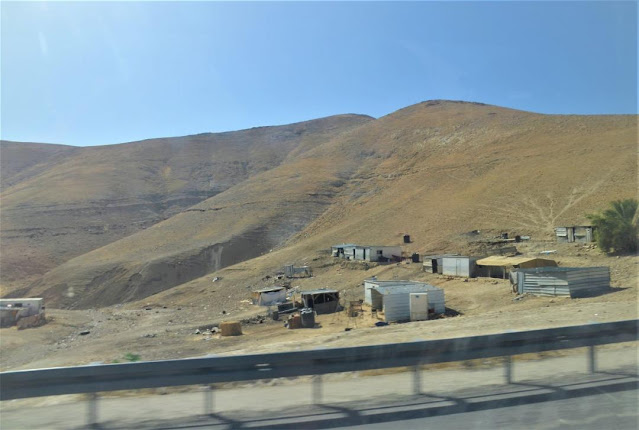 The banks of the receding body of salt water are visible from an outlook at the Biankini Village Resort Dead Sea. For those like me who were unfamiliar with the name, and at first glance think of beach bikinis or burkinis, Angelo Levi Bianchini was an officer in the Italian Royal  Navy. A street in Jerusalem near Hillel Street and the Italian Synagogue is named for the Zionist and Israel lover.
But that story is for another time.
I mention Bianchini because of the street where in 2001 a terrorist attempted to blow up the Biankini Pub, filled with nearly 200 young people drinking beer on a Friday night and celebrating 3 birthdays.
Biankini Pub owner Dina Dagan realized something was wrong when a man from Ramallah walked into her business after she had seen on the news that Ramallah had been closed because of riots.
He had indeed left a powerful explosive in a bag in the restroom. She was able to carry the bomb out to the street, get the police to believe her, and finally come and detonate the explosive, saving the lives of her patrons.
The episode is material also for a powerful story. But I mention it because Dagan grew up in Jerusalem and experienced the Intifada firsthand. She did not decide to leave until after the Moment Cafe bombing, where some of the same young people she saved were murdered by another terrorist's bomb. 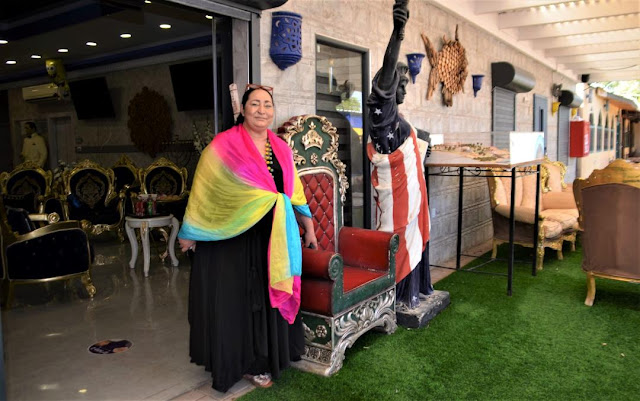 Dina Dagan moved to the Dead Sea to find "peace" and started the Biankini Resort in the barren sand. The resort has grown into a mega-complex, with a large swimming pool and shul. 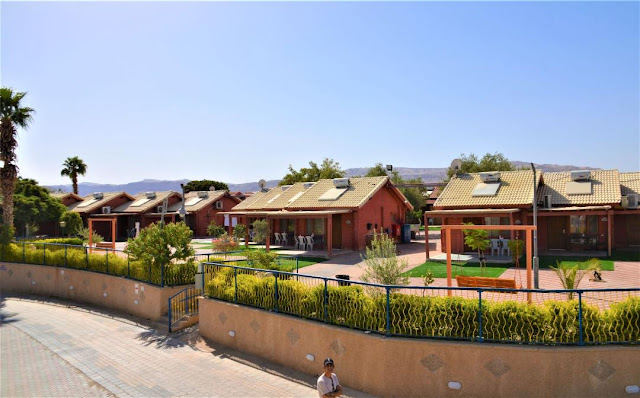 There are small family cabins with play areas and privacy and greenery she planted. 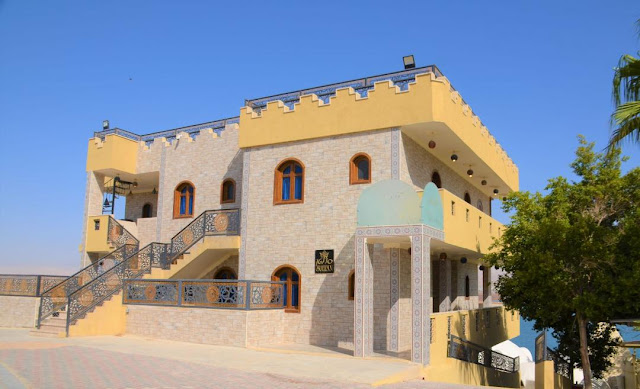 The newest of her 110 rooms are in a building named Sultan and one includes a suite with a private jacuzzi, and as in the rest of the resort, over-the-top Moroccan decor. 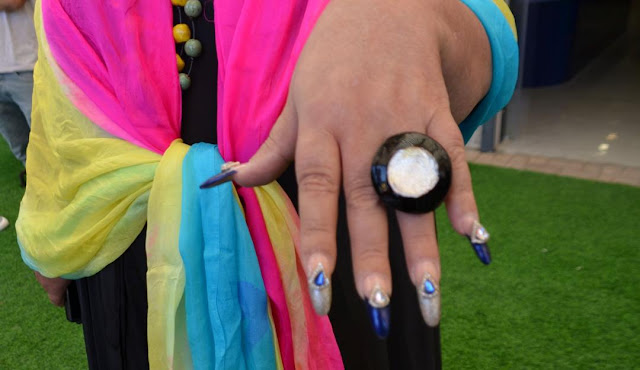 Dina Dagan, flamboyant down to her blue and white bejeweled fingernails is angry with the Booking.com warning. After working hard for over 20 years to build a business that provides 4 million shekel back into the local economy, where Arabs and Jews work together "in an island of peace" and hosts people from all over the world - Muslim, Christian, Druze, and Jewish.- now is dangerous she asked!

Booking.com watered down their warning on the site to properties in the area stating, "Review any travel advisories provided by your government to make an informed decision about your stay in this area, which may be considered conflict-area" 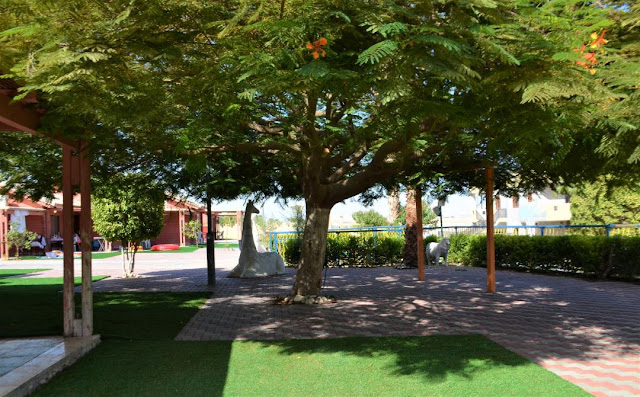 I have seen comments that this is not a serious development, will not hinder tourism, etc. in this place where Dagan says brings people together. They do not know and if see a warning will be afraid to come -"To the most peaceful place in the world."
Dina Dagan who carried an explosive device out to a Jerusalem street in 2001, calls what is happening, "Intifada Rishona." (First Intifada) A time of virtual shaming which is political and hurts us all - all Israelis. How can this be, a one-sided decision deciding on the borders of Israel when there are terror attacks around the world?
Airbnb and now Booking.com - who will be next in this war of discrimination, that hurts everyone?
Looking up on the way into the resort from the parking lot, we saw birds sheltering from the hot sun in a dinosaur's mouth. 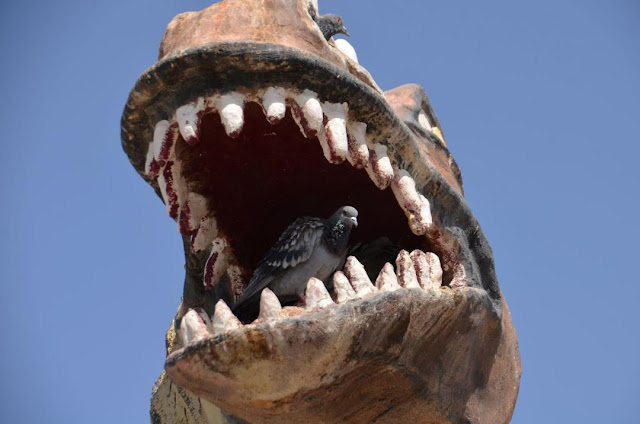 On the way out, I looked down to see Queen Elizabeth and Albert Einstein waving goodbye. 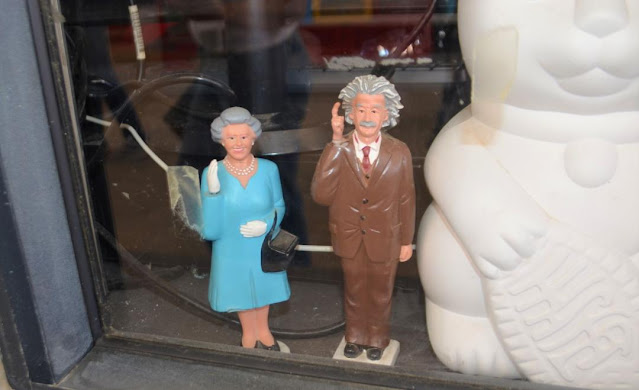 International tourists should be warned - Biankini Resort has just about anything you could imagine - and more.
All images credit - @RealJStreets  sharon@rjstreets.com
Elder of Ziyon at Sunday, October 02, 2022
‹
›
Home
View web version