What is it about Jews building homes that gets under peoples’ skin? We know what they claim. They say that building homes for Jews in disputed territory is an “obstacle to peace.” That, however, is an obvious lie. The real reason the world does not want Jews to build homes in Israel is Jew-hatred: antisemitism.

How do we know that the “obstacle to peace” mantra is a lie providing cover for hate? We know this because of history and precedent. The 600 homes of the Jews of Yamit proved no obstacle to peace with Egypt. The 2,530 homes in Gush Katif and the 270 residences in Samaria did not stand in the way of the great Gaza giveaway. And the 450,000 Jews in Judea and Samaria did not stop Oslo and local Arab autonomy.

Despite the thousands of homes built to shelter Jews in their holy, indigenous territory, Egypt still received the gift of Sinai, while the UNRWA “refugees” were given de facto states in Judea, Samaria, and Gaza.

Construction, even of Jewish homes in ancient Jewish land, did not prevent any of this from happening. Where Jewish homes once stood, today there are no Jews. These areas have been ethnically cleansed of any Jewish presence, with the exception of a handful of captives held by Gaza in the years since 2005, two of them almost certainly dead.

Jewish homes don’t get in the way of peace negotiations or Israeli concessions because Israel doesn’t let them. Instead, the Jewish State simply expels thousands of its own people, Jews themselves, and flattens their homes with bulldozers.

It really is that straightforward. Thousands of Jewish homes go up and come down. Sinai gets Egypt. The rest get autonomy and Gaza.

None of this truth is reflected in the July 1st letter sent by 29 Democratic Congressmen to Anthony Blinken, on the eve of Biden's trip to Israel. The letter writers do not care that Israel anyway destroys the homes before handing over the land. They demand that the President pressure Israel to STOP BUILDING HOMES FOR JEWS!

We write to express our alarm over the Israeli government’s renewed effort to build settlements in the West Bank area known as E-1.

The writers, in their own words, write to express their “alarm” over Israel’s “renewed effort to build settlements” in parts of the Jewish homeland they don’t want us to have.

As legislators committed to the goal of a just and secure peace between Israel and the Palestinians, we are grateful to this administration for its previous work to prevent harmful actions that move us further from this goal, including the successful prevention of E-1 settlement plans that were under consideration last year.

The 29 legislators call the building of Jewish homes, “harmful actions” and laud the President for preventing such construction in the past. They say these things, they claim, because they are committed to a “just and secure peace." This is a demonstrable lie. If they were committed to a just and secure peace, they would speak out not about Jewish homes, but Arab terror. Especially considering that according to a 2015 article by Batya Medad, 15 percent of the home-building Jews are American citizens, with all the right to the protections that citizenship affords.

We ask that you continue holding firm on this issue, especially as you prepare for President Biden’s forthcoming visit to the region.

The letter is by way of reminding Blinken that his job, as a court Jew, is to continue to hold firm against Jews building any more homes on their land.

As 26 Members of Congress wrote in a letter from November 2021, efforts to advance settlement construction in E-1 “pose an irreconcilable challenge to a lasting peace solution between Israel and the Palestinians… [and] have been referred to as ‘doomsday settlements’ because they would threaten the territorial contiguity necessary for a viable independent Palestinian state by dividing the north of the West Bank from the south, as well as the West Bank from East Jerusalem.”

The writers, from the Progressive wing of the Democratic Party, point us to the fact that their numbers are growing. In November there were 26. Now there are 29 of them, all demanding that Jews stop building houses. This letter, write the congressmen, echoes the November letter which states that Jewish homes “pose an irreconcilable challenge to a lasting peace solution.”

The homes themselves, are referred to as “doomsday settlements” without a hint of irony or any recognition that it is antisemitic to characterize a Jewish town in this manner. The 29 are quite frank in stating that there will be no peace if a Jew builds a home anywhere in Judea, Samaria, or Jerusalem. Which means that should Jews build homes, as far as these members of congress are concerned, they can be murdered by Arab terrorists with impunity and it will be the Jews' own damned fault.

Preserving this territorial contiguity is vital to the prospects for peace and a two-state solution, and we remain strongly opposed to any such effort to entrench the occupation of Palestinian territory.

The antisemitic letter signed by the 29 Democrats uses all the familiar catchwords to cover their hate. Peace, blah blah blah, Two-state solution, blah blah blah, Occupation, blah blah blah. But the end game remains the same, the goal is no Jewish presence. And no building homes in the meantime. They don’t want the Jews to be comfortable.

How do we know the shibboleths of peace, two-state solution, and occupation are meaningless doublespeak? We know it because neither Jew nor Arab wants two states for two peoples. There are a million polls to attest to this fact. And here's another, quite salient fact: Jewish homes are always destroyed by Israel when the Jewish State cedes Jewish territory to Muslims.

The congressmen were “heartened” to hear that Biden also wants Jews to stop building homes. They want to remind Blinken that even Nides, also a Jew, fell into line, calling Jews building homes a “disaster.” They are saying they want Biden to come down on the Jews “full bore” to make them stop. building. homes.

This administration has demonstrated the progress that serious diplomatic engagement on these   sensitive issues can lead to, and we are looking forward to the President’s first visit to Israel this month. Despite this administration’s clear commitment to preventing settlement construction in E-1, the Israeli government has recently reversed its position and announced plans to move ahead with E-1 settlements once again, scheduling the final hearing on the objections to the project within days of the President’s planned visit.  United States intervention at this pivotal moment is critical. In recent months, there has been an increase in violent clashes, and we are hopeful that the President’s visit will help ease tensions and reassure both parties of the United States’ commitment to a negotiated peace.

They are so looking forward, say the letter-writing Dems, to the President giving Israel a good diplomatic thrashing over Jews building homes. The Jews know that Biden doesn’t like Jews to build homes, yet the Israeli government has announced brazen plans to even build MORE Jewish homes. The Democrats speak of the causal effect of Jews building homes to “an increase in violent clashes” AKA Arab terror.

We are encouraged by reports that the Biden administration has pushed the Israeli government not to move forward with the planned hearing on E-1 settlement construction, and we hope you will continue to prioritize this issue with the current interim Israeli government and any future coalitions.

The 29 Democrats say they are encouraged by the fact that Biden is pushing Israel to stop all these conniving Israeli plans of building more homes for Jews. They hope, as well, that Jews building homes will be treated as a major issue on Biden’s agenda for his Israel visit.

We urge you to continue emphasizing in the lead-up to this visit that settlement construction in E-1 remains a red line for the United States, and to use every diplomatic tool at your disposal to ensure that Israel does not further advance these devastating plans.

In conclusion, the signees “urge” the President to keep “emphasizing” that when Jews build homes, it crosses a “red line," and suggest he should use “every diplomatic tool at your disposal” to ensure this building of Jewish homes, comes to a stop. Their message to Biden is that the very thought of Jews taking shelter in their historic homeland--actually LIVING there--is in their opinion, a “devastating” thing.

They mean all this. Sincerely.

We know it to be true: antisemites and antisemitic congressmen come and go. They each in turn, get the chance to lend authority to the antisemitic hate they spew. They will say, for example, that no Jew has the right to build a home on his land, and that no wonder the Arabs get violent at the very thought of it. The truth does not matter to them. If the truth mattered a damn to them, they'd realize that violence derives not from building homes, but from hatred for those who seek shelter therein.

A Jew building a home is a harmless thing. Bricks and mortar, red tiles and heavy machinery, they matter not. There is no natural relationship between construction and violence. Violence comes from hate. The building of homes for Jews no more invites Arab terror than the rape victim's choice of clothing provokes sexual violence.

The 29 congressmen should be ashamed of blaming Jewish victims for being attacked and murdered by vicious Arab terrorists. But the 29 are not ashamed. They are proud to reveal their naked antisemitic hatred, before the entire world.

Here are their names: 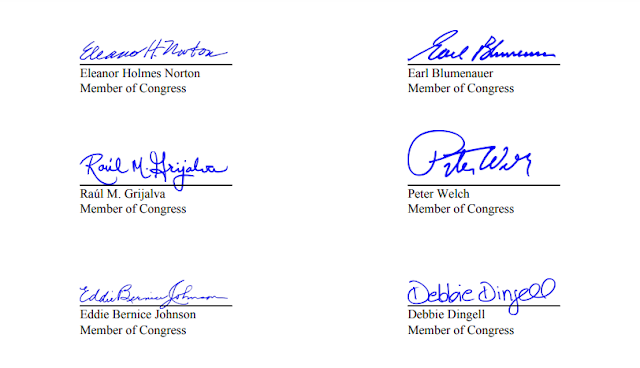 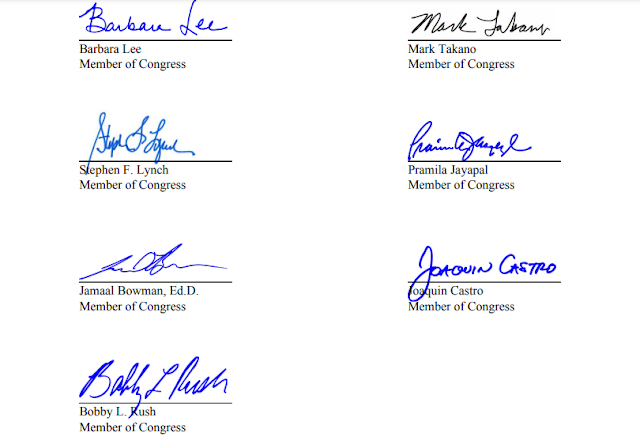