IfNotNow says Judaism has no intrinsic meaning. Which is pretty much the definition of antisemitism. 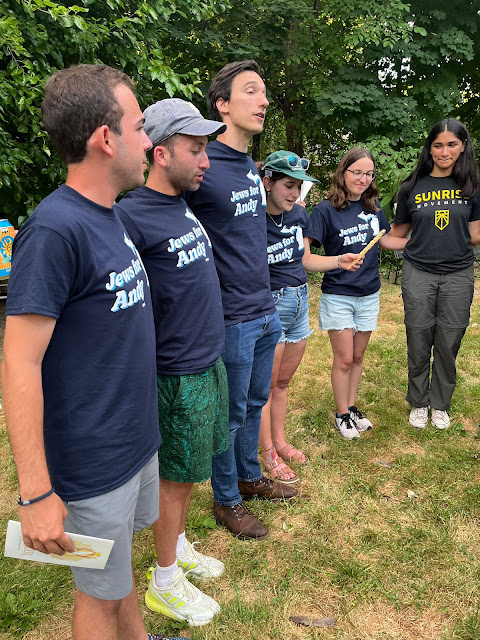 Yesterday, IfNotNow published a "havdalah service" for people who were campaigning for Andy Levin in Michigan - "Jews for Andy."
Havdalah is meant to separate the Sabbath from the weekday, but for these people, it was done in broad daylight, which is something we have seen anti-Israel groups do before.
This was also done in a "Jews for Rashida" "Passover seder" held in 2020 where the entire idea of a seder was subverted and perverted for political ends.
In this case, though, IfNotNow tried to pre-empt any criticism with this tweet:

To all the trolls ready to dunk on a Havdalah ceremony while there’s still light out — you’re just telling on yourself when you police others’ Jewish practices.
There’s no right or wrong way to be Jewish.

It didn't work out for them. As of this writing, this tweet has been "ratioed" 3-1, one of the relatively rare cases where far more people comment negatively to a tweet than click on "Like." My comment was, "So I can light a Christmas tree and call it a Chanukah menorah? I can have a Yom Kippur feast and call it a fast? I can replace a shofar with a kazoo?"

Yet the tweet says a great deal about the Israel haters who claim Jewish legitimacy and their relationship with Judaism.

But Judaism isn't completely worthless to these "progressives." To them, it is a prop - declare themselves Jewish, do something that vaguely resembles a Jewish tradition, tie it to a political cause and then discard it.

This isn't "pick and choose" Judaism. This is claiming that Judaism simply has no value or meaning except for selfish political reasons.

And if you proclaim that Judaism has no intrinsic value, then you are an antisemite.