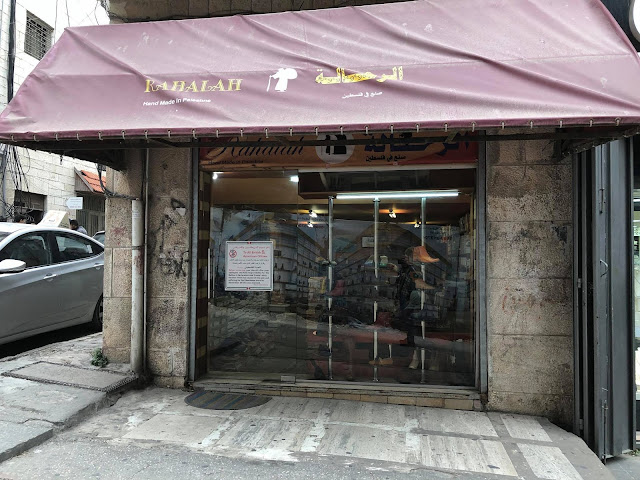 A Palestinian leather goods and embroidery shop in Ramallah, named "Rahala" ("nomad,") insists that American, British and French customers grovel and apologize before they are allowed to purchase any items: 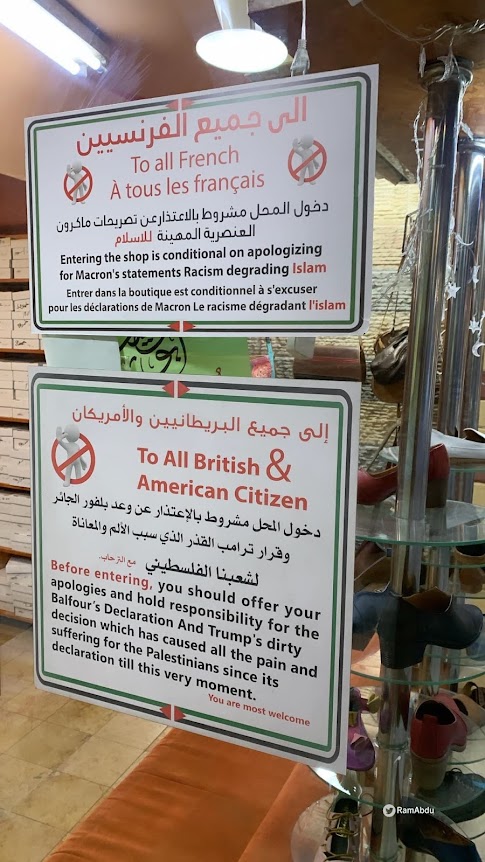 This won't hurt their sales. On the contrary. Their products are meant to appeal to exactly the kinds of people who would happily grovel for the privilege of purchasing these items.
A Chicago Tribune article last year featuring Noora Jebreal, an American importer from the shop, says:

But more than pretty pieces, the products have a political meaning.
Holding up a pink slipper with black crossover threading resembling a wire fence, Imad says in Arabic, “I made this shoe in 1999, and it’s called ‘prison,’” during a March Instagram Live interview with Jebreal. The slipper represents the open-air prison that many Palestinians and humanitarians feel Gaza has become.

Of course, in 1999 Gaza was not under blockade and the Oslo process was in full swing, but why should a reporter bother to check the facts from people who are clearly pushing a political message?
One other part of the article struck me, and it is a small but telling example of how the media is willing and eager to allow Palestinian lies to become part of the record.

The Rahalah workers, according to Jebreal, couldn’t take things to the post to get mailed from Bethlehem to Tel Aviv during the height of the pandemic.
“What was once a 15-minute car ride is now a 45-minute car ride (for his transporters from Ramallah to Bethlehem),” she said. “And you know gas is more expensive out there too because Israel has sanctions on that for Palestinians. And then you have to pay the actual shipping from Israel to the states.”

I had never heard of "gasoline sanctions" on Palestinians before, so I looked up current fuel prices on gasoline in the Palestinian territories and in Israel.
According to Numbeo, the average price for gasoline in the Palestinian territories is ILS 6.55 per liter, while in Israel it is ILS 6.97. (That's $7.74 per gallon.)
Yes, gas is cheaper for Palestinians than for Israelis.
But the actual facts are too good to check. After all, the media is filled with stories about how Israel oppresses Palestinians, so of course it sounds right that Israel would tax fuel for them, too. And why would such a nice young woman lie? So her lie gets published, unedited, by a major American newspaper, and the goal of demonizing Israel with cumulative lies - which is the entire point of this store - is achieved.
Palestinian propaganda has won yet again.
And as this article shows, it is cumulative - when one lie gets accepted, then it becomes easier for the next lie to be accepted as well, since no one bothered to fact check the first one. Eventually you create an entire narrative based on lies that are so entrenched that the media doesn't bother to begin to unravel them, and simply publishes them without checking.
Elder of Ziyon at Sunday, July 31, 2022
‹
›
Home
View web version