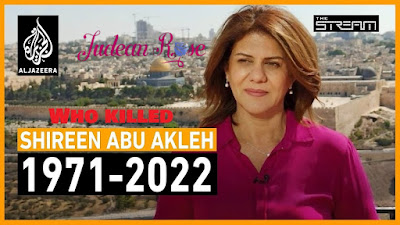 Who killed Abu Akleh is an important question for some, and not at all for others, but no matter how you feel about the question, the answer lies with the bullet the PA does not want you to see. Some of those who want the answer to the question of who killed Abu Akleh may be desperate to prove Israel’s innocence or guilt. Others don’t care to know the answer at all, as long as they can smear the Jews. A third, likely much smaller group includes Elder of Ziyon, host of this column, who cares only to find the definitive truth, no matter where it leads. For the rest of us, however, there is no question of who killed Abu Akleh. There’s a bullet. The PA won’t allow Israel to examine it. Case closed.

It’s really very simple: if they won’t show us the bullet, Israel’s not guilty. End of story. That works for me, but it doesn’t work for everyone. Some of us need to see what is, and not what isn’t. The truth is more important than a cynical surmise.

At one point convinced that IDF gunfire was responsible for the Al Jazeera reporter’s death, for example, Elder laid out his reasoning, concluding with these words: “I hope that I can also always be on the side of the truth tellers.”

This is an admirable goal for an honest blogger swimming against a tide of anti-Israel hate. The fact, however, is that for many of us, attempting to answer the question of who killed Abu Akleh is moot. We know who killed her, if not their names, their allegiance. Because if it were Israel who had killed Abu Akleh, you’re darned tooting that the PA would be showing everyone and his dog that bullet, the one that would point a definitive finger at Israel. The fact that they—the PA—won’t show us that bullet is proof positive that Israel is of a certainty not responsible for the death of Abu Akleh.

At one point we might have been persuaded to believe that the PA lacks the expertise to know for sure who killed Abu Akleh. This would have been reason enough not to show anyone the bullet or Shireen’s helmet, for that matter. The PA may not be able to tell whodunnit, but could be concerned at the possibility that an outside ballistics expert might yet exonerate Israel. But this is a case of trying too hard to be impartial.

The world is not on Israel’s side. No matter what proof there is, the world will continue to finger Israel for the deliberate murder of a journalist who willingly entered a combat zone. So there really is no reason to hide that bullet. The world doesn’t even care about the truth. They only care about demonizing the Jewish State.

Let’s look at what we do know. On the same day that Shireen Abu Akleh was shot and killed, May 11, the Jerusalem Post reported that “An initial autopsy of her body by Palestinian coroners said that she died after a bullet that was fired several meters away struck her head. Dr. Ryan al-Ali of the Pathological Institute at the a-Najah University in Nablus was quoted by al-Jarmak TV channel as saying that they could not determine who had shot her.”

Despite the fact that PA coroners could not determine responsibility for Abu Akleh’s death, and in spite of the fact that the PA refused to show Israel the bullet, the media et al., not only claims that Israel killed Abu Akleh, but that we did it intentionally and with malice. Wikipedia, in its entry on Abu Akleh, states that the “Palestinian Ministry of Health reported that the IDF killed her.” Only way, way down the page on this very long entry do we learn the truth: Israel asked to examine the bullet, and the PA refused:

“Israeli Minister of Defense Benny Gantz said the IDF had requested that Palestinians let Israelis examine the bullet. Israel also suggested a joint probe into the death, which was rejected by the Palestinian Authority on the grounds that it wanted an independent investigation.”

Israel even admitted one of its soldiers may have been responsible, and still—STILL—the PA refuses to let anyone see the evidence. What conclusion can we draw other than that the bullet shows that in fact, Israel is not responsible for the death of Abu Akleh, an Al Jazeera journalist who, of her own free will, entered a conflict zone erupting with active gunfire to cover a story.

Those of us who are not military or ballistics expert may not be able to offer intelligent theories about the angle of the bullet or the distance of the gunshot from the unfortunate journalist, and we may not be able you a thing about muzzle speed. There is nothing we can add to the discussion of who was closer to Abu Akleh, the Jenin shooters, or the IDF soldiers. But we know that the PA won’t show us that bullet.

There is other evidence, of course. Elder of Ziyon has done a wonderful job of following leads, for example, uncovering eyewitness testimony suggesting there were no Israelis nearby and that Shireen was shot by snipers from a building (no IDF soldiers were shooting from buildings). EOZ also gave us a brilliant piece about bullet math, how the sheer number of bullets overwhelmingly suggest that it was not an Israeli gun that fired the shot that killed Abu Akleh.

Here in this blog, Elder also looked at errors of fact and omissions by online investigators like Bellingcat, and called them on it, too. Elder exposed the cherry-picking and outright lies of Time Magazine, CNN, the NY Times, the AP, and even Israeli fifth column Haaretz. This coverage is important. We can’t just let them lie and omit. We can’t let them smear us and not respond.

We can’t let reporters get away with it when they know there were Arab snipers in the vicinity of Abu Akleh, but hid that from the public. Elder didn’t. We can’t allow the coroner to retract his decision and tell the world that IDF soldiers shot Shireen with a gun they don’t use, a Ruger. Elder called them on it. And when members of Congress pressed the FBI to do an independent investigation of Abu Akleh’s death based on the fact that she was a US citizen, Elder was there to question whether the FBI would be in violation of its own long-standing policy should it do so (it would).

All of these issues were important to expose. And yet, in some ways, none of it matters. Because the PA is hiding that bullet, so we already know the truth. Susan Sarandon and Rashida Tlaib can spout all the hateful antisemitic lies about Israel they wish but we will still know the truth: Israel did not kill Abu Akleh, not intentionally, and certainly not by accident. Else the PA would be showing us that bullet, evidence of that literal smoking gun. 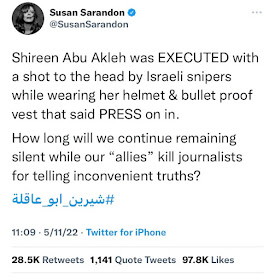 When will the world and those who stand by Apartheid Israel that continues to murder, torture and commit war crimes finally say: "Enough"?

Shireen Abu Akleh was murdered by a government that receives unconditional funding by our country with zero accountability. https://t.co/c2yLpM7UC1

Elder has also remarked on the refusal to share the bullet and the bias of the PA “investigation” into who killed Abu Akleh. He is certainly not naïve, but looks for proof of what is, rather than what isn’t, for example, that bullet they won’t let us see. His work is important and good and I am content to sit back and let the cynic in me watch him do all the heavy lifting, because as far as I’m concerned, I already know the truth, and the world does too, and if they say they don’t, they’re lying.

We know it wasn’t Israel who killed Abu Akleh, because it all boils down to the bullet that they, the PA, will not show you. That the world looks away from this fact is not a surprise—their hate for Israel and the Jewish people is nothing new. This inappropriate use of a reporter’s death to demonize the Jews and their state is just one more salvo in thousands of years’ worth of the same damned thing. All the haters are happy to have the truth hidden from you as they spout their anti-Jewish hate from their various platforms.

It doesn’t matter because they will not win. However it looks to your naked eyes, the collective they—the anti-Israel media, the celebrities, and everyday haters—have already lost and we have won, even as their guts grind inside them. Because we will always know the truth—that they hid the bullet—and we will always know why. The world knows this, too. They know they’ve lost and the Jews have won.

They can’t get away from it. The evidence confronts these haters smack in the face. The Jews have been winning for thousands of years.

The proof is we’re still here.