Hamas, Islamic Jihad spinning their decision not to attack Israel on Jerusalem Day

I noted last week that for a week before Yom Yerushalayim, Palestinian terror groups and media were in a frenzy anticipating a massive terror response to the Flag March, threatening a religious war if Jews would march through Jerusalem and all but promising that Gaza rockets would be fired and a new terror wave begun.
It appears that Israel contacted their Arab friends and those states pressured Hamas not to respond. It worked, and here is a case where the Abraham Accords - derided by "experts" as a meaningless agreement that doesn't affect the core conflict - actually helped avert a war.

However, Hamas and Islamic Jihad now have to explain to their audiences why they didn't attack after a week of inciting them to war.
And that is exactly what they are doing. 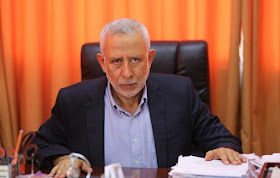 Muhammad Al-Hindi, a member of the Political Bureau of the Islamic Jihad Movement and official in the political department, confirmed today, Sunday, that the battle with the enemy is open and long and takes different forms, and the resistance is the one who determines the appropriate time for its intervention.

Whoever is aware of politics knows that the resistance in the Gaza Strip operates according to its assessments of the situation, and is not tempted or dragged behind passion or what the occupation plans.
The resistance didn't respond for considerations that it is more aware of than those who watch from the outside. The occupation forces were ready for the confrontation, through which they wanted to restore deterrence power, but the resistance ...is proceeding according to an integrated and extended plan, and it has its information and estimates, and if its assessment is otherwise. , the decision would have been different, because the scenes [of the Flag Msrch] were enough to make them rain the lava of the occupation’s rapists with their rockets, and turn Tel Aviv into a mass of flames.

I've also seen other articles spinning the fact that Hamas didn't attack: articles with pride that Israel was forced to keep planes in the air over Gaza based on only threats, stories pointing out that there were still lots of minor terror attacks over the weekend, pointing out that Israel had to deploy so many police to protect the Flag March which proves that it doesn't control Jerusalem, and saying that Israel begged Hamas not to attack so Hamas was the stronger party.
In honor/shame societies, backing down from a promised fight is a huge humiliation, and lots of ink is being spilled to turn this humiliation into a victory.
Which brings up another factor that helped convince Hamas not to launch an attack: Hamas leaders really liked getting all these phone calls from Arab national leaders asking them not to attack. This increased their prestige considerably, at the expense of Mahmoud Abbas, who was reportedly fuming at being left out of the loop. This pro-Hamas cartoon summarizes this: 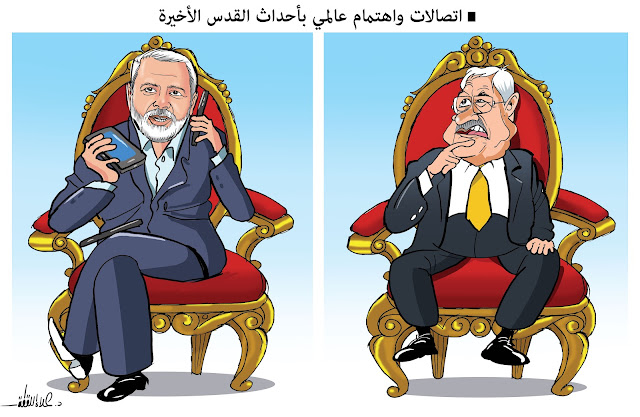 The honor at being treated like the national leader of Palestinians outweighed the shame at not attacking Israel as promised.