Eyewitnesses to Shireen Abu Aklehs''s death initially said she was shot by SNIPERS IN BUILDINGS. (The IDF wasn't shooting from buildings.)

More evidence keeps pouring in that Shireen Abu Akleh was killed by Palestinian terrorists, not by the IDF, as my comprehensive video showed. The latest ones confirm what I have been saying and showing, that she was killed by Palestinian snipers on and in buildings to her southeast. More interestingly, they come from eyewitnesses - which Ap and CNN consider credible as to explain what happened.
This video from Abu Akleh's colleague, Shatha Hanaysha, who was next to her as she died, says it all:

Reporter: "Did you see the sniper who was shooting at you?"
Shatha Hanaysha: "We saw the crowd pointing at the building where the snipers were. What happened is that we were standing across from a building with snipers."

There were no IDF troops shooting from buildings. But as we have seen, some of the witnesses on the scene pointed out "shebab" snipers on and in buildings to the southeast of where Shireen was shot. The only buildings "across" from Shireen and Shatha are to the east and southeast.

In the full interview, she makes other references to the snipers/"soldiers" being opposite her, saying that "the soldiers were right across from us, they could see us" - not down the street but "across" - and "we were between a wall and the sniper" - the wall was  parallel to the IDF convoy, the Islamist snipers were in the buildings across the street to the southeast.

Hanaysha was widely quoted after the killing as saying that Israel was responsible. She probably thought that there were Israeli snipers in buildings on the other side of the cemetery, between a hundred and two hundred meters away. 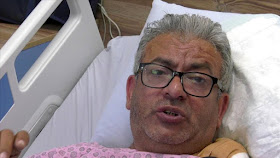 The second witness to see snipers in buildings is none other than Ali al-Samoudi, the first person shot, who was widely interviewed from his hospital bed:

We, the crew of Al-Jazeera TV, went to Jenin on May 6, 2022 [sic], after receiving news of the intention of the Israeli army to storm the camp. ...As soon as we reached the place of the event, we got out of the car after we took security and safety precautions, put the [flak jackets] and helmets bearing the word "PRESS" in Arabic and English.  After a few minutes, we heard the sound of bullets raining down on us from the side of the occupation soldiers who were on the roofs of the buildings opposite us , amid the screams of Palestinian citizens who call out to us: Get down on the ground, snipers are targeting you. . I was hit in the lower back, and Shireen screamed: Ali was wounded, Ali was wounded.

I believe both of these interviews were on the same day as the shootings.
The next day, both of these eyewitnesses stopped talking about snipers in buildings.
These are actual witnesses seeing the Palestinian snipers in the buildings shooting directly at them - but they thought the snipers were Israeli so they told the truth.  When they found out that there were no Israelis there, they changed their stories to being shot from the armored vehicles to the south.
The snipers they saw were, by definition, in line of sight to the reporters. Some easily could have beene the distance away from Shireen that the bullet acoustic analysis suggest the killers would be.
The fact that CNN and AP have ignored this evidence is damning to them. And they still refuse to correct their reports that say there were no militants in the area, let alone that they are the likely killers.
Keep in mind that if the snipers were far enough from the reporters not be be easily identified as Jenin militants, the helmet-wearing reporters may have been far enough from the snipers not to be easily identified as press. They were nearly two football fields away from each other.
If I had to guess which buildings the sniper who killed Abu Akleh was in, I think it would be one of these two, probably the more southern one. Both are tall enough, both roughly the right distance from Abu Akleh, and both "across" from the reporters. 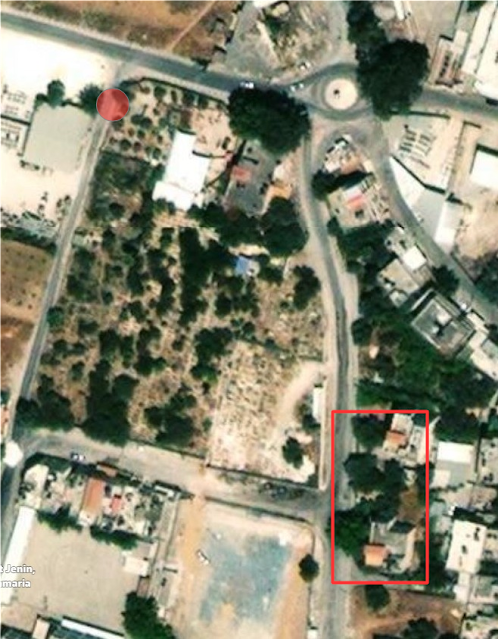