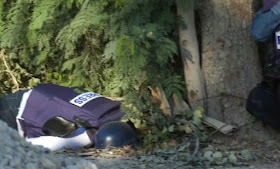 Remember when the Palestinian coroner said that Shireen Abu Akleh was shot in the forehead?

The results of the initial forensic medicine report indicate that the direct cause of death was brain damage caused by a high-velocity bullet. The bullet penetrated the skull cavity causing an entry wound and then exited from the cavity causing another wound. Following that, the bullet hit the internal side of the protective helmet, ricocheted and lodged in the damaged tissues inside the skull.

The bullet hit her in front, exited the back, hit the helmet from inside and ricocheted back into her brain.
Al Jazeera even said she was shot in the face.
Apparently, the Palestinian prosecutor didn't like that story. Because the "investigation" has concluded something different:

Palestinian Attorney General Akram Al-Khatib said today that based on the Public Prosecution’s report on the killing of Shireen Abu Akleh, it was established that the veteran Al Jazeera journalist was killed by an armor-piercing projectile fired directly at her head by an Israeli sniper.
According Al-Khatib, an autopsy and forensic examination conducted in Nablus after Abu Akleh’s death showed she was shot from the back, indicating that she was attempting to flee as Israeli forces continued to fire towards the group of journalists.

He added that the bullet had general and specific markings that match a Mini Ruger semi-automatic sniper weapon.

The IDF doesn't use Rugers.
One more thing that they claim:

Al-Khatib said the facts on the ground confirm the absence of any armed clashes at the time when the crime occurred, stressing that the investigation carried out by the Public Prosecution will be the cornerstone in the prosecution of the Israeli killers. “The only source of firing was by the occupation forces with the aim to kill,” he said.