The war against the Jews being waged by "human rights" groups @Amnesty, @HRW and @BTselem 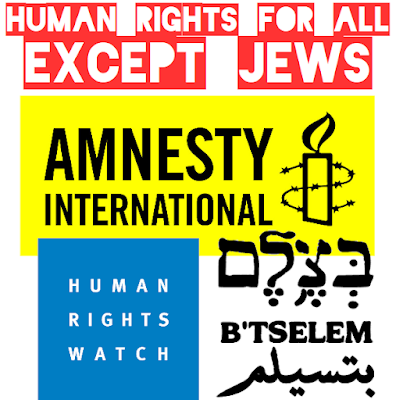 Israel has existed for 73 years. During that time, the rights of the Arab citizens of Israel have only increased. They lived under military rule until 1966 and not thereafter.  Since then, while it has been slow, their rights as full citizens have been strengthened and supported by Israel's High Court. Today, they have unprecedented rights and have become successfully integrated in fields like medicine and high tech, and millions of shekels are earmarked to improve the lives of Arab Israelis.
Palestinian Arabs lived under effective belligerent military occupation from 1967 until the Oslo process in the 1990s.  Since then, the vast majority of them have been living under full autonomy in Area A and Gaza, and partial autonomy in Area B, under their own governments. They also have more rights than they had before the 1990s.
Yet at the exact same time that Palestinian Arabs both within and without the territories have been gaining more rights, human rights groups like B'Tselem, Amnesty International and Human Rights Watch have been steadily accusing Israel of worse and worse crimes.
Nothing makes that clearer than their recent jihad. During the course of a single year, each of those groups decided that Israel's treatment of Palestinians has crossed the line into being considered "apartheid."
And, amazingly, each of them - B'Tselem, HRW and Amnesty, whose report is being published Tuesday - relied on different and provably twisted legal analyses to reach this same conclusion.
They didn't use that term in 1993. They didn't use that term in 2019. But now, suddenly, all three of them reach the same conclusion when there are more Arab rights under Israeli rule than ever before. (Even the Nation State law goes not say a word that contradicts the idea of equality under the law.)
Put this together, and it is blindingly obvious that these three organizations deciding over the past year to label Israel as guilty of apartheid is not a coincidence. In each case, the decision to find Israel guilty was made first, and the lengthy, multi-page, laughably flawed "legal analysis" to justify it was written afterwards.
In each case, counterexamples that prove that their fact-finding is biased and wrong is ignored or buried.
In each case, the same arguments they use against Israel would find scores of nations worldwide far more guilty of the same crime, yet they are silent about those.
So why are these purported human rights groups, who are still reluctant to call Chinese persecution of Uyghurs "apartheid," suddenly on the same page to make that accusation against Israel when they never did before?
I cannot know if there was any collusion to bring these three organizations to the same predetermined conclusion. Yet it does seem curious that these accusations follow Israel's historic normalization agreements with Bahrain, the UAE and Morocco. The Abraham Accords may have incentivized these groups who had relied on a solid Arab hatred of Israel as their reliable anti-Israel allies. When that dam burst, the "human rights" groups may have felt it was time to open up a new front against Israel to forestall Israel being treated by the world the same as its autocratic, human-rights violating neighbors.
Whatever the reason for the timing of this choreography, there is an underlying theme between all three reports that points to the real goal for the "human rights" community: to claim that the concept of a Jewish state is itself a crime.
The B'Tselem report concentrates its claims on the idea of "Jewish supremacy." Since that was largely decried as antisemitic, the other two reports mostly stayed away from that formulation (Amnesty prefers "Jewish domination.") But both HRW and Amnesty make it clear that they consider the very idea of a Jewish state to be the source of "Israeli apartheid," even when Israel's Declaration of Independence and numerous High Court rulings affirm the equality of all citizens.
To all three, the entire raison d'être of Israel is immoral.  They aren't against apartheid - ask the Palestinians in Lebanon if they would gladly change places with the Palestinians under "apartheid" in Gaza or Ramallah or Jerusalem or Abu Ghosh. The word "apartheid" is simply a rhetorical weapon to attack Israel's very legitimacy as a place of refuge for Jews who are persecuted worldwide.
These "human rights" NGOs are against Jewish statehood, Jewish self-determination, Jewish self-defense from antisemitic attacks and even peaceful, harmonious relations between the Jewish state and its neighbors. They want to set the calendar back to the days before 1948 when Arabs attacked Jews daily and Jews could not legally defend themselves.
Like all antisemitic movements throughout history, they justify their immorality and hate of Jewish human rights behind the lie of universal human rights.
In 1939, in the wake of Kristallnacht, the Wagner–Rogers Bill was proposed in the Senate to allow 20,000 Jewish children from Germany to immigrate to the United States. It did not even make it to a vote because of an antisemitic senator, Robert Rice Reynolds (D-NC.)
During hearings, one opponent of saving the lives of the Jewish children, Francis H. Kinnicutt of Allied Patriotic Societies, gave five reasons against allowing the Jewish children to be allowed to immigrate. His very first reason was:

Jewish parents in Germany would have been making the wrenching decision to save a remnant of their families by sending their own children away before things got even worse under Nazi rule, and Kinnicutt pretended that his immoral stance was based on his care about the welfare of the doomed children being taken away from their parents!
That is the kind of cynicism we are seeing from these so-called human rights groups today. They claim to care about universal rights, but when it comes to the human rights of Jews, they find "moral" reasons to oppose them.
The Israel/Palestinian conflict is not about human rights for Palestinians, as these groups assert. It is about competing human rights for Jews and for Arabs. There is no perfect solution, but the optimal solution requires drawing the line that maximizes the rights for all and minimizes the violation of rights for all.
History shows that no one besides Jews in a position of power will consistently defend the human rights of Jews, while lots of people - including Jews - will defend the human rights of those who want to take away the human rights of Jews. History also shows that Arabs under Jewish rule will always have more rights and more opportunities than Jews under Arab rule ever did or ever would.
Which means that the Jewish state, with all its arguments and flaws and critics, is the optimal solution to maximize human rights for all. It will never be perfect, and there will always be people who are unhappy about the compromises needed to maximize rights for all, Jew and Arab. Yet the Jewish state  will always be better than the alternative that these human rights hypocrites are proposing - the dissolution of the Jewish state.
Israel is the only guarantor of Jewish human rights - not the UN, not the ICC, not Amnesty or Human Rights Watch, and not even the US. These NGOs attack Israel's very existence as a Jewish state because they don't want Jews to enjoy the same human rights that everyone else has. B'Tselem's repeated use of the slander "Jewish supremacy" proves that.
That is the reason they all decided to get behind the Big Lie of "Israeli apartheid." They don't care about apartheid. Their goal is destroying the only state that can assure Jews will always have true political rights.