Lots of attacks against Jews in the past few days, from the Right to the Left and in between

The Jewish community in our country must get serious about our self-defense, real quick. This was today in Orlando. pic.twitter.com/4UgCJXDFv6

Last week in Brooklyn, a young visibly Jewish woman was verbally attacked on a subway car by a Black man who threatened her and screamed for her to leave the train while passengers watched and didn't intervene.
Because to help a Jewish woman might be racist.
On Saturday in Lakewood, NJ, a snowplow driver laughingly took a video of himself purposefully dumping snow on two Orthodox Jews.
In Chicago: 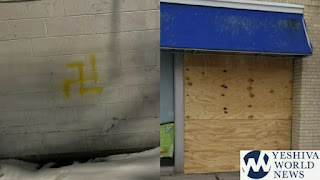 The Jewish Community in West Rogers Park, Chicago was hit by string of hate crimes over the past 24 hours, YWN has learned. Two Jewish institutions have had swastikas scrawled on them, two Jewish stores had their windows smashed, and a Jewish man was attacked.
The two Jewish institutions that had swastikas scrawled on them are the Hanna Sacks Bais Yaakov, and Congregation F.R.E.E.
The two Jewish stores that had their windows smashed are Tel Aviv Bakery, and Kol Tuv Kosher Supermarket.
Meanwhile, on Sunday night a frum [Orthodox] man walking was attacked and bloodied in an unprovoked incident.
The victim was walking near W. Devon Ave. and N. Sacramento Ave. when he was attacked by an unknown male.

In London, a group of youths smashed the windows of a Jewish-owned house.
Meanwhile, also in London on Saturday,

Reports of an open bus being driven along #StamfordHill #N16 at 12:20pm with speakers blaring "Yidos Go Home"
Appeared to be targeting Orthodox Jews leaving #Synagogue

History depicts Nazi Übermensch against the Jews in Europe, and the correct truth is that Jewish Zionism is the Übermensch over the Palestinian.

Which happens to be the same message that Amnesty International is communicating in its upcoming report accusing Israel of "apartheid," with its repeated message of "Jewish domination" over Palestinians.

When no one does anything about the "little" incidents, they turn into much worse incidents.