There are two reasons the media has been soft-pedaling the many antisemitic attacks last week.
1) The victims are Jews.
2) The attackers are Arabs.
The media has internalized the lie that Jews are privileged whites and Arabs are disadvantaged people of color. To people with that mindset,  the "whites" are presumed to be in the wrong and the POC are in the right, no matter what the actual circumstances.
Since the actual facts contradict the narrative that the media has been pushing for years, there is a reluctance to contradict all that previous coverage with those false assumptions. So the media (and politicians) duck and only say anything when they are FORCED to.
Finally, on Friday, some outlets were shamed into covering the story. But they didn't leave their biases aside.
The New York Times actually claimed that the attacks in New York City that they ignored all week were "clashes" between Zionists and pro-Palestinian protesters, not that 100% of the incidents reported were attacks on Jews. That 100% of the injured were Jews. 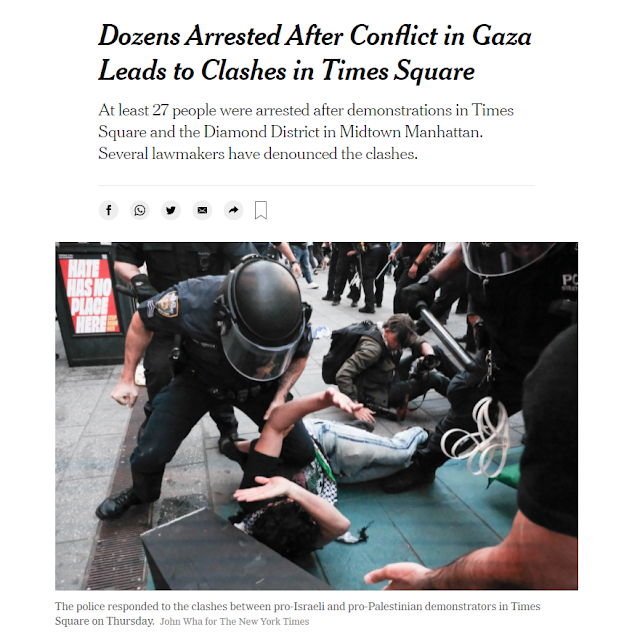 And other media outlets used the same script of "clashes."

When Hamas attacks Israel for no reason, or when Arabs attack Jews in broad daylight, suddenly the media that was screaming lies about Israel deliberately attacking civilians is "even-handed."
The antisemitic memes that Jews control the media and the government affect even those who know it is nonsense. In the back of their minds, they - including many Jewish reporters - don't want to be looked upon as puppets of the great Jewish/Zionist conspiracy. Hence, avoiding reporting as long as possible - and then "all-lives mattering" the reporting they are forced into doing.
One cannot stress enough how toxic these identity politics are. And after years of modern antisemites converting Jews from racially inferior to racially privileged, they've accomplished their goal of having ordinary people look at Jews as part of the despised group.
Which is something Jews have a few thousand years of experience in.
This isn't a story about resurgent antisemitism. This is a story about antisemitism that has stealthily become part of the fabric of Western society.
Without the years of positioning Jews as the rich, white successful, arrogant "chosen", and of positioning Palestinians as the brown, oppressed, helpless victims, the violence we've seen could never occur.
So this isn't a story about a few  keffiyeh clad thugs, as the Israel haters take pains to try to paint it (when forced to.) It is a story of an entire mindset that the far Left has managed to create, where people are victims or victimizers, Jews are by definition victimizers, and victims are always right.
Anyone who truly cares about the future of America should be angry at what we see happening, the stealthy hate that has infected large swaths of society and that became explicit this week.
It didn't happen in a vacuum. These are the fruits of slanders that started behind the Iron Curtain and has become mainstream in the US.