Everything the media has been telling you about Israel, vaccines and Palestinians has been false. Oops. 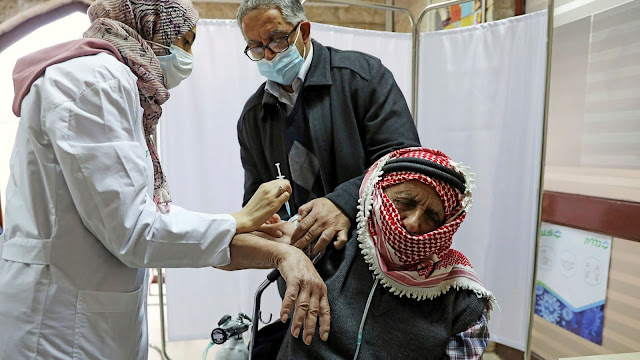 According to Ma'an, the vaccines went to medical workers in Palestinian hospitals.

Which means that Israel is acting exactly as international law demands under the laws of belligerent occupation, which Israel's High Court uses as a basis for its rulings.
Israel doesn't have to provide vaccines unless the local authorities ask. When they asked, Israel responded and gave it to them.
Practically every article about Israel not providing vaccines, and everything that NGOs accused Israel of, are lies.
The Palestinians don't want to publicly ask for vaccines, and they are set to get large quantities over the next two months. Israel transferring the vaccines publicly is also politically sensitive - the family of Hadar Goldin is suing for Israel not to provide any aid to Gaza until his body is returned by Hamas.
And the Palestinian political leaders are taking propaganda advantage of the worldwide condemnation of Israel scrupulously adhering to international law. This article in Palestine News Network shows that their primary concern isn't actually procuring vaccines, but castigating Israel and recruiting celebrity Westerners to help:

Secretary-General of the Palestinian National Initiative Movement, Dr. Mustafa Barghouti confirmed that, thanks to the Palestinian efforts to expose Israeli policies, a major global campaign was launched against the Israeli policy of apartheid and racial discrimination aimed at denying Palestinians access to vaccines against Corona disease.

Barghouti confirmed the launch of a global signature campaign against the Israeli policy of “ Medical”, demanding the immediate provision of safe vaccines for the Palestinian people.

Tens of thousands of internationals have signed the campaign petition so far, including prominent international doctors and scientists, thinkers and artists such, including Judith Butler, Daniel Barenboim and Noam Chomsky.

He affirmed that the solidarity committees with the Palestinian people have been mobilized in various parts of the globe to participate in this campaign, which is taking place under the slogan of condemning this type of apartheid.

Dr. Barghouti added that the gravity of the Israeli crime of racial discrimination in the matter of providing vaccines and protection from the dangerous Corona disease revealed the reality and truth of the Israeli apartheid regime, which will pay dearly for its criminal denial of human rights and for the necessity of unity and solidarity with humanity in facing epidemics.

Does this sound like their priority is Palestinian lives, or attacking Israel?
All lies. And none of the "progressive" groups that claim to "care deeply  about Israel" will apologize for spreading these lies.
We have lots of ideas, but we need more resources to be even more effective. Please donate today to help get the message out and to help defend Israel.
Elder of Ziyon at Wednesday, January 13, 2021
‹
›
Home
View web version