Foreign Funding and Influence in US Universities (RealJerusalemStreets)

The clock is ticking.

The Iranian regime and Ayatollahs are waiting and watching.

Patiently, watching, as the pattern of a Persian rug is spun and woven to completion.

Let's imagine: Iranians in the United States conducting online reconnaissance of university professors, then sending “phishing” emails to get their credentials to obtain unauthorized access to victim professor accounts to steal intellectual property, research, and other academic data.

Only this is not the plot of a new best-selling fiction novel or cable tv thriller. It has happened in the United States and around the world.

In Section 117 of the Higher Education Act (HEA) of 1965, the United States Congress requires U.S. colleges and universities to report twice a year to the U.S. Department of Education all foreign gifts and contracts over $250,000. While Section 117 does not prohibit institutions from taking foreign money, it does mandate accurate and transparent disclosures of amounts and sources.

In June 2020, the Section 117 information reporting portal was upgraded.  It yields significant information on compliance and showed 7,000 transactions and approximately $3.8 billion of foreign gifts and contracts from institutions, including 60 institutions previously not reporting.

"For at least two decades, the industry has been on direct notice that at least some of these foreign sources are hostile to the United States and are targeting their investments...to project soft power, steal sensitive and proprietary research, and spread propaganda," stated a 34-page report of the US Department of Education General Counsel, published in October 2020.

The concern is that foreign money buys influence or control over teaching and research.

Donations from Arab countries for a Center for Contemporary Arab Studies at Georgetown University was one of the reasons for the HEA statute. Other concerns at the time included Japanese companies partnering with the U.S. The idea was transparency in reporting could counteract the distorting influence of foreign money on teaching and research. The Chinese influence has grown over recent years. Beginning in 2009, the flow of foreign money, sourced from the governments of Qatar, Saudi Arabia, and China rose substantially.

In 2008, a Senate committee expressed new concerns over national security and domestic policy impact with post 9/11 Saudi Arabian conditional and substantial donations to Middle Eastern studies centers. However, the Education Department and Congress did not take action.

The FBI  has warned, "Foreign adversaries and competitors take advantage of” the American higher education and research enterprise to “improve their economies and militaries by stealing intellectual property to gain advantages over the United States.” These nations “use varied means to acquire information and technology to gain political, military, and economic advantages” including recruiting individuals for “espionage,” exploiting the student visa program for “improper purposes,” and spreading false information for “political or other reasons.”

The higher education sector self-reported over $6.6 billion from Qatar, China, Saudi Arabia, and the United Arab Emirates, with the most recent July 31, 2020, reporting period yielding an additional $1.05 billion reported from these countries alone, concluded the US Department of Education.

Returning to Iran, in March 2018, the Justice Department charged nine Iranians affiliated with a Tehran-based company, the Mabna Institute, with hacking into 144 American universities to steal sensitive data and intellectual property on behalf of the Islamic Revolutionary Guard Corps. Gholamreza Rafatnejad and Ehsan Mohammadi, two of the defendants, founded the Mabna Institute in 2013 to assist Iranian universities and scientific and research organizations in stealing access to non-Iranian scientific resources. The defendants targeted data, including science and technology, engineering, social sciences, medical, and other professional fields around the world. Approximately 31 terabytes of US academic data and intellectual property was reported stolen according to the Indictment. United States v. Rafatnejad et al., No. 18-cr-00094 (S.D.N.Y. Feb. 7, 2018). 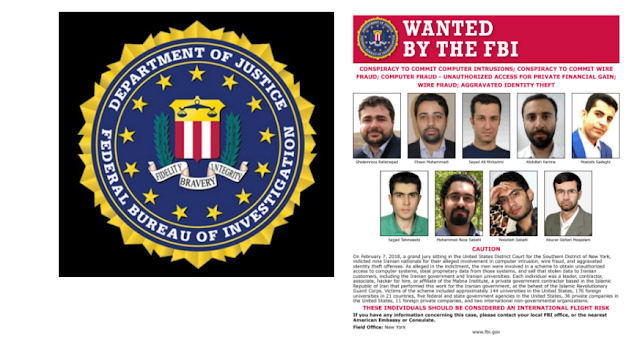 After multiple examples of serious breaches of political and intellectual security with a lack of oversight, the DOE report concludes: "U.S. institutions are technological treasure troves where leading and internationally competitive fields, such as nanoscience, are booming. For too long, these institutions have provided an unprecedented level of access to foreign governments and their instrumentalities in an environment lacking transparency and oversight by the industry, the Department, and our partner agencies."

"Iran's decision to continue violating its commitments, to raise the enrichment level and advance the industrial ability to enrich uranium underground, cannot be explained in any way except as the continued realization of its intention to develop a military nuclear program. Israel will not allow Iran to manufacture nuclear weapons," announced Prime Minister Benjamin Netanyahu.

Will a Biden administration monitor foreign government influence in the US? Will the US be prepared for future cyber attacks from Iran and other hostile regimes?

Should we hold our breath for the new US Congress to follow up on the important issues affecting institutions of higher learning and demand full disclosure of foreign funding as Section 117 requires?