A progressive Jewish coalition of Ameinu, Americans for Peace Now, Habonim Dror North America, Hashomer Hatzair World Movement, Jewish Labor Committee, J Street, New Israel Fund, Partners for Progressive Israel, Reconstructing Judaism and T'ruah issued a statement against the IHRA working definition of antisemitism that has been accepted by much of Europe, many universities in the US and Canada and the US Government:

As organizations that care deeply about the State of Israel and about the wellbeing of the Jewish people, we are deeply committed to the struggle against antisemitism. We are thus obligated to share our concerns about ways in which the effort to combat antisemitism is being misused and exploited to instead suppress legitimate free speech, criticism of Israeli government actions, and advocacy for Palestinian rights. In particular, the effort to enshrine in domestic law and institutional policy the International Holocaust Remembrance Alliance (IHRA) Working Definition of Antisemitism, with its accompanying “contemporary examples,” risks wrongly equating what may be legitimate activities with antisemitism.
This effort has created opportunities for abuse and politicization by the outgoing Trump administration and others, undermining the moral clarity of the effort to dismantle antisemitism.
We respect the original creation of the IHRA Working Definition as an illustrative tool and as part of a larger and ongoing conversation about the nature of antisemitism. While we maintain no substantive objection to the core definition itself, our concern with its adoption as a legal tool is with the IHRA definition’s “contemporary examples,” which have been included as integral to the definition. We fear its adoption in law or policy at the state, federal and university level and in corporate governance has the potential to undermine core freedoms, and in some cases already has. For this reason, the Progressive Israel Network opposes the codification in US law or policy of the IHRA Working Definition of Antisemitism.

This is disingenuous. If they really cared about antisemitism, they would lobby to modify the definition and examples, not throw it out.
This next sentence proves it:

There can be no doubt that some anti-Zionists and critics of Israeli policy can sometimes cross the line into antisemitism — and they must be confronted when they do.

If the definition doesn't include any examples of anti-Zionism crossing the line into antisemitism, then how can people who cross the line be confronted? They will just say they are merely anti-Israel and no one can touch them!  (And these "progressives" will happily defend them!)
After all, when so-called progressives are confronted with antisemitism from their political allies, they aren't in the forefront of condemning it - they are almost always silent.

Yet, Secretary Pompeo’s State Department’s unambiguous declarations that  “anti-Zionism is anti-Semitism” and that “the Global BDS Campaign [is] a manifestation of anti-Semitism” represent a harmful overreach. This overreach, which is primarily aimed at shielding the present Israeli government and its occupation from all criticism, is made possible by the use of the Working Definition’s “contemporary examples.” The examples regard as antisemitic the claim that “the existence of a State of Israel is a racist endeavor” and the application of “double standards” to Israel “by requiring of it a behavior not expected or demanded of any other democratic nation.”

Here we see how the "progressive" groups are knowingly lying. They cannot find an example of how the IHRA working definition has been used for overreach, so instead they quote Pompeo, who was expressing his opinion, not a definition.
Practically every single time a critic of the definition writes their objections, they ignore the critical part of the definition that proves they are wrong: "Criticism of Israel similar to that leveled against any other country cannot be regarded as antisemitic." No one defines any other nation as racist, or apartheid. Comparing Israel to Nazis is only done because the accusers are aiming at hurting Jews.
Here, these people  are explicitly saying that Israel should be judged more harshly than other nations who do the same or worse.
And it is what they believe!
The fact is that they are against virtually every example in the working definition that mentions Israel, because they admire the people who say those antisemitic tropes.
They don't want this example because that would show that Norman Finkelstein spouts antisemitism.
This would show that Ilhan Omar spouts antisemitism.
The entire staff at Mondoweiss, +972, Electronic Intifada, IfNotNow, Jewish Voice for Peace, Peter Beinart....
Everyone who ever claimed that Gaza was a concentration camp. Carlos Latuff. Eli Valley. 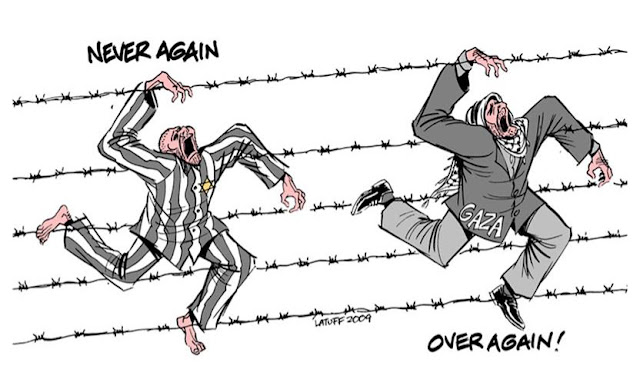 These "progressives" don't want to tar Finkelstein and Omar and Mondoweiss, so they justify treating Israel with double standards, comparing it to Nazis, saying that Jews have no national rights.
But one thing the critics never do - they never put forth their own "better" definition.
If the working definition is flawed, then fix it. If they are afraid it can be misused, then add verbiage to ensure that doesn't happen. Show which examples you would remove and justify how those examples don't single out the Jewish state for special opprobrium.
They can't. They know they can't.. They know they are lying when they say the definition equates criticism of Israel with antisemitism. So they write essays filled with doubletalk to hide the fact that in the end, they want to justify and support people who demonize Israel.
They know - and everyone knows - that  the only reason that Israel is demonized and treated with double standards is because it is the Jewish state.
We have lots of ideas, but we need more resources to be even more effective. Please donate today to help get the message out and to help defend Israel.
Elder of Ziyon at Wednesday, January 13, 2021
‹
›
Home
View web version