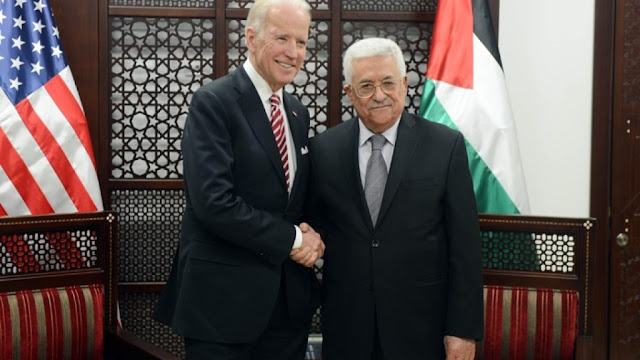 The Jerusalem Center for Public Affairs has a Hebrew article analyzing Mahmoud Abbas' and Fatah's reactions to a Joe Biden presidency.
According to the article, senior Fatah sources say that PA Chairman Mahmoud Abbas was very pleased at Biden's election and they are no longer interested in reconciliation with Hamas nor in parliamentary elections, supposedly agreed at a meeting in Istanbul.
Abbas viewed reconciliation with Hamas as a last ditch effort to stave off Trump's Deal of the Century, but now thinks that with Trump out of the way, unity with Hamas would open the PLO up to accusations of being aligned with a terror group.
Even before the elections, it seemed unlikely that there would be either reconciliation or elections. Hamas and Fatah started sniping at each other immediately after the Istanbul talks. Both Fatah and Hamas members accused the lead negotiators (Jibril Rajoub and Salah a-Aruri, respectively) of selling out their causes for their own political goals.
The article also says that the election is prompting Abbas to militarily wipe out the backers of his rival Mahmoud Dahlan who have some strongholds in various West Bank camps and confiscate their weapons.
It looks like Biden's election will be the excuse Abbas uses to save face and resume accepting tax revenue from Israel that he has been refusing since Netanyahu said he would annex portions of Judea and Samaria. This doesn't seem likely to happen in a Biden administration so Abbas can escape his cage of honor that was holding Palestinians hostage for months. Observers say that he will likewise resume security coordination with Israel.
Abbas will position his accepting hundreds of millions of dollars that he had refused as a "goodwill gesture" to demand that new negotiations for a Palestinian state be resumed, based on the 1949 armistice lines and with Jerusalem as its capital, confident that Biden will back him up on that and erase any vestige of the Trump Peace to Prosperity plan, pretending that the last four years never happened and resuming things as if Obama was still president.
We have lots of ideas, but we need more resources to be even more effective. Please donate today to help get the message out and to help defend Israel.
Elder of Ziyon at Sunday, November 08, 2020
‹
›
Home
View web version