Islamic Jihad terrorist ends hunger strike, claims victory, yet Israel will not release him any earlier than if he didn't strike

For the past couple of months, Palestinian media - and some Western media - have been consumed with following the plight of Maher al-Akhras, who Israel put into administrative detention in July for membership in the Islamic Jihad terror group.
Akhras started his hunger strike the day he was arrested, July 27, insisting that he would not end it until his immediate release.
On Friday, he caved - completely.
Now Akhras is saying that he ended the hunger strike upon agreement that Israel releases him on November 26 and will not re-arrest him.
His detention was going to end on November 26th anyway, and Israel already said last month that they will not re-arrest him. In fact, Akhras rejected these exact terms in mid-October.
It seems quite unlikely that Akhras has really been hunger striking since July 27th. His condition has been on the "verge of death" for four weeks already. And somehow he had the strength to pose for this photo with members of the Arab Joint List in the hospital on Friday: 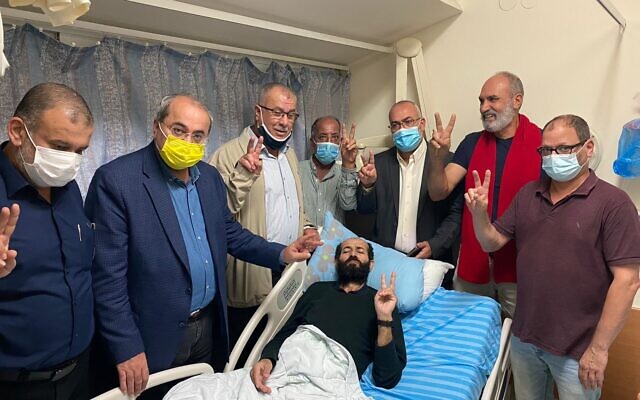 Notice that two of the visitors were not wearing masks for this photo - in the hospital with a person who is supposedly on the edge of death!
Arab media is celebrating his November 26 release as a victory for him.
Even though Akhras' wife denied he is a member of Islamic Jihad, the terror group has been supporting him more than any other group.
(h/t Tomer Ilan)
We have lots of ideas, but we need more resources to be even more effective. Please donate today to help get the message out and to help defend Israel.
Elder of Ziyon at Sunday, November 08, 2020
‹
›
Home
View web version