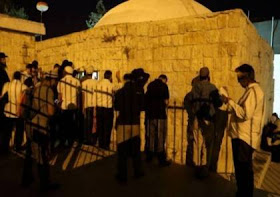 The Israeli army canceled the entry of hundreds of Jews to the Tomb of Joseph in the West Bank city of Nablus, last night, due to fears of clashes between its forces and the Palestinians, who are always protesting such provocative incursions.

And the Israeli public radio said it was that the Israeli army canceled the entry of 1500 Jews to Joseph's tomb, and that the army explained its decision that it "is trying to prevent frictions with the Palestinians, and could lead to other confrontations and the deterioration of the situation."

The Israeli army added that it was decided to reduce the incursions of Jewish groups into Palestinian cities, "as an operational necessity only."

Israeli radio quoted Palestinian sources as saying that a decrease in the IDF incursions into Palestinian cities has been observed since the confrontations in the city of Jenin last Thursday-Friday, during which a Palestinian policeman was killed.

The Israeli army claimed that there was no connection between the martyrdom of the Palestinian policeman and the decision to cancel the entry of Jews to Joseph's grave, but admitted that it was trying to calm the situation in the West Bank.


The fact that Palestinian media is reporting this indicates that they are teaching their readers that riots pay off.

This may have been a big mistake.