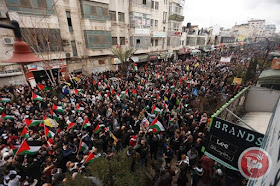 Right now, in conjunction with Mahmoud Abbas' speech to the UN today, there is a large rally in Ramallah against the Peace to Prosperity Plan.

What the organizers don't want you to know is that the Palestinian Authority is pulling out all the stops to increase the number of participants.

They closed down all government offices - and the Palestinian Authority employs some 200,000 workers.

They provided buses for people outside Ramallah to come to the rally.

It seems that the schools are closed, since the Teacher's Union urged all teachers to go to the rally.

In other words, this is not a popular rally - it is a Palestinian Authority and Fatah rally where they did everything they could to make it look impressive.

It would be interesting to know whether UNRWA schools are also shut down today.

The brainwashing of the people against the peace plan has been effective. A poll released yesterday showed that 66.5% of Palestinians "strongly opposed" the plan while another 22.7% "somewhat oppose it." Of course, one cannot find a single objective news report about the deal in the Palestinian media, essentially controlled by Fatah and Hamas. (Even ostensibly independent media understands that anyone who writes in support of the plan would be metaphorically or literally lynched.)

Meanwhile, a column in Felesteen (translated here) had perhaps the best description of why peace is impossible:


Their “deal” includes economic peace, prosperity, projects, facilities and other relatively petty tools that have no place in the ongoing battle to expel the Israeli occupier from the land of Palestine and liberate the Islamic religious sites.

The only "peace" plan acceptable to the Palestinians is one where Israel disappears, or one that gives them a path to destroy Israel.