Mysterious video of a person who claims to be a Jew in Saudi Arabia, inviting Jews to visit him 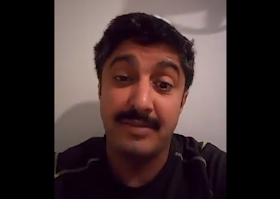 This video has been making the rounds of Arab, especially Saudi, media the past week.

It shows a man who claims to be a Jew from Najran, a city in southwestern Saudi Arabia near the Yemen border.

There were a number of Jews originally from Yemen who had conquered Najran in pre-Islamic times. In 1934, the town came under Saudi rule and the Jews were persecuted. In 1949 the Jews fled back to Yemen and from there they went to Israel.

This man, however, claims that he still lives in Najran as a Jew and he is inviting Jews from around the world to visit him, where he can show them ancient synagogues -one that is a thousand years old and one that is over 1500 years old.

It is not unreasonable to assume that there was at least a few synagogues in Najran over the 1500 years that Jews lived there, but no one seems to be aware of them.

Could there still be crypto-Jews in Najran? It is certainly possible. In the comments on this article in Slaati, one person claims to know this man, whose last name he says is Mizrahi, and confirms that there are still some hidden Jews in Najran.

I cannot find any mention on the web of synagogues in Najran.


We have lots of ideas, but we need more resources to be even more effective. Please donate today to help get the message out and to help defend Israel.
Elder of Ziyon at Monday, February 10, 2020
‹
›
Home
View web version