There are blood libels every day

A tweet from Alice Rothchild, a long time anti-Israel activist, author, filmmaker, physician and member of Jewish Voice for Peace who says she has written for the Seattle Times and Boston Globe. 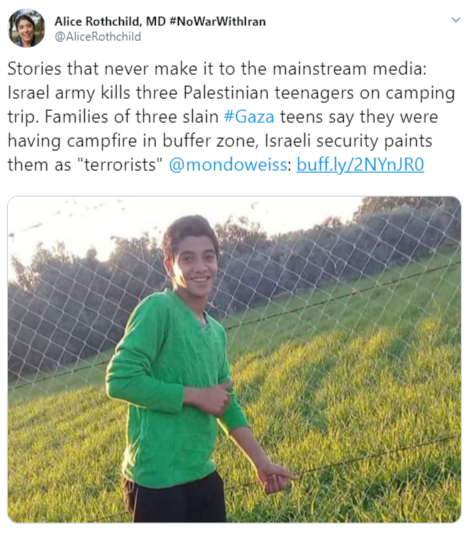 Her Mondoweiss link fills in the details of the lie:

An Israeli army statement said the three teenagers had crossed some 400 metres into Israel and were hiding in a thicket when a military jeep approached them. The army said that the young men threw two objects believed to be explosives at the jeep, prompting soldiers to open fire, killing them all. But Mohammed’s father refused to believe the army’s version of events. “The closest he ever got to resisting [against Israel] was by attending the Great March of Return protests a few times,” Hani said of his son. “He never held a gun, he didn’t participate in any military groups and I’m sure he didn’t know how to make a grenade.  “If the boys crossed the border, I bet they did it for entertainment only and were unaware of what the consequences could be. The Israelis are lying.”

According to a friend of the slain teenagers, who asked not to be named, Mohammed, Salem and Mahmoud gathered in the square of the village of al-Zawayda on Tuesday afternoon after a long day at school. “It was about an hour before sunset, and they decided to go to some farmland owned by Salem’s family,” the friend told MEE. “They just wanted a break from hard studying.” The Naami family’s land is located some 200 metres from the fence that separates Gaza from Israel east of the Maghazi refugee camp. While the area is often monitored by Israeli forces – which enforce a ‘buffer zone’ hundreds of metres into the Palestinian territory – the teenagers regularly came to the area to relax around a bonfire, the friend said.


It is fairly obvious the boys crossed the fence - meaning they cut the fence. The IDF watched them as they went the 400 meters into Israel. Their bodies were recovered in Israel. They carried a knife and screwdriver. This happened at 8:30 PM.  There is infrared video of them:

Some Gazans made up a different story, based on this video: that the things we see thrown are the boys' clothing, and the IDF humiliated them by forcing them to strip before executing them with machine guns.

That's also obviously a lie. Heat is shown as black in the video, so they threw hot things that exploded into smaller components. Clothes would not show up as black.

This is just as much a blood libel as the accusation last week that Israeli Jews kidnapped a boy from Jerusalem and drowned him, the lie that was tweeted by Hanan Ashrawi and retweeted by Rashida Tlaib. Their falsity is obvious to anyone who is not an anti-Israel fanatic.

Which is why her tweet was retweeted and "liked" by various JVP branches and Mondoweiss itself.

We have lots of ideas, but we need more resources to be even more effective. Please donate today to help get the message out and to help defend Israel.
Elder of Ziyon at Friday, January 31, 2020
‹
›
Home
View web version