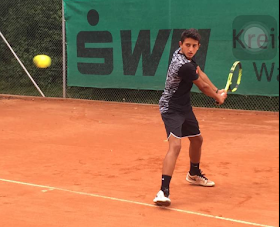 Tunisian President Qais Saeed called for an investigation into the participation of a tennis player with Israeli citizenship in an international tournament in Tunisia.

A presidential statement said today that President Saeed asked the Minister of Youth and Sports Sunni Sheikh "to open an investigation in the purpose to determine responsibilities", pointing to Tunisia's principled position rejecting the establishment of relations with Israel in any way.

Aaron Cohen, holder of French and Israeli citizenship, participated in an international tennis tournament that started in Tunisia on January 26.

Cohen played his first match against Tunisian Karim El-Shazly last Sunday, winning two sets for nothing, and he also won his second match against Italian Simone Cavalieri before losing the third match against Portuguese Miguel Gomez and leaving Tunisia on Tuesday.

The Tunisian presidency confirmed that the player "entered Tunisia with a French passport, but he participated in the tournament as an Israeli."

President Qais Saeed - who is against normalization with Israel - pledged in his election campaign not to allow the entry of Israeli passport holders to Tunisia.

Cohen is a 17 year old who is ranked 349 as a junior with a total win-loss record of 4-2. He was born in France and made aliyah as a teen.

The president of Tunisia is seething over an Israeli teen playing tennis in his country. Hate is a fascinating thing.

We have lots of ideas, but we need more resources to be even more effective. Please donate today to help get the message out and to help defend Israel.
Elder of Ziyon at Thursday, January 30, 2020
‹
›
Home
View web version