It's the peace, stupid

One of the biggest complaints by the anti-Israel crowd against the Trump plan is the supposed "bantustans" of Palestinian territory only connected by roads, bridges or tunnels. This is said to be intolerable for a sovereign nation

Yet if you look at Wikipedia, you can see that there are literally hundreds of examples where the territory or territories of one state is fully or functionally within the territory of another, known as enclaves, exclaves, or variants of those. The largest example in the world (which is really a semi-enclave) is Alaska, only accessible to the rest of the US via land through Canada.

We mentioned one example in passing, that of the border between the Netherlands and Belgium at Baarle-Hertog: 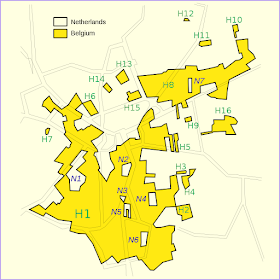 This is the possibly the most complicated one but there are a huge number of others. Up until 2015, the border between India and Bangladesh had not only over a hundred enclaves but enclaves within enclaves (and one parcel of land that was a piece of India within Bangladesh, within India, within Bangladesh.)

There are even some small Canadian land parcels that are only accessible through the United States.

If there are hundreds of examples of such arrangements working perfectly well, then why is there such an uproar over a pathway to peace that would do the same for Palestine?

The answer is in the question. The Israel-haters have no desire for peace.

It is no coincidence that the Trump plan is named "peace to prosperity."  Unlike every single previous plan, this is the first one that is focused on peace, not land.

If there is real peace, then no one would care about the enclaves of Palestinian lands in Israel and Israeli lands within Palestine (i.e., "settlements.")

The ideal, which the plan envisions, is that Israel and Palestine would be like Belgium and the Netherlands - two partners in peace. Any Arab can visit the Temple Mount, any Jew can visit the synagogues in Jericho and Joseph's Tomb  in Nablus, without the need of heavily armed security protecting the visitors.

When there is real peace, the borders are not important.

This is the fundamental reason why Israel supports the plan and the Palestinians are so dead-set against it. Only Israel has ever desired real peace, just as Israel has thirsted for real peace with Jordan and Egypt and the rest of the Arab world.

The "pro-Palestinian" activists, although many belong to groups with "peace" in their names, do not want peace with Israel. They want Israel to be destroyed one way or another, and they - as well as Palestinian leaders - look at an independent Palestine as a weapon to end Israel, not as a goal in itself.

It has been 26 years since Oslo, but in all that time no Palestinian school - not one - has taught students that they should thirst for peace with Israel. On the contrary, Israel is always the enemy and it must one day be reclaimed as "Palestine."

For some reason, the world thinks that the existence of two states would automatically bring peace. Everyone has it backwards. It is peace that would bring two states, because Israel would happily give the responsibility of governance to a Palestinian state that was friendly, where the borders are as open as those between EU states.

The Trump plan is a true peace plan - a vision of how peace and prosperity can bring about a political solution. The reason it is unrealistic is because Palestinians are taught hate from birth.

And that is the real obstacle to peace.

The world seems to have forgotten that peace is the goal.


(h/t Ian)
We have lots of ideas, but we need more resources to be even more effective. Please donate today to help get the message out and to help defend Israel.
Elder of Ziyon at Friday, January 31, 2020
‹
›
Home
View web version