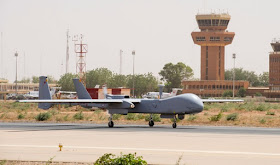 The Moroccan army has received 3 Israeli-made reconnaissance planes, according to French intelligence website Intelligence Online as quoted by Ma'an.

The news, which was also reported by Moroccan media, confirms that the size of the deal amounted to $48 million.

The drones are the Israeli Heron.

In 2014, there were reports of another 3 Herons that ended up in Morocco via France.


We have lots of ideas, but we need more resources to be even more effective. Please donate today to help get the message out and to help defend Israel.
Elder of Ziyon at Friday, January 31, 2020
‹
›
Home
View web version