Abbas told the UN he wants new elections. He lied. 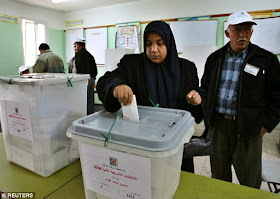 In September, Mahmoud Abbas announced at the UN that he intends to schedule elections as soon as he returns to Ramallah. "I have decided, upon my return from this international gathering, to announce a date for the holding of general elections in Palestine – in the West Bank, including East Jerusalem and the Gaza Strip," he said.

Five weeks later, no such date has been announced.

What did happen is that Abbas appointed a committee with only members of his Fatah party, not to schedule elections but to "study" the elections. “We will discuss the elections, preparations for holding it and measures that will be taken to achieve this goal,” Abbas said.

I didn't bother to report about this because this is all a game. Abbas doesn't plan on holding elections - he is planning to use the pretense of elections to achieve more power.

This game has been played before. Abbas agreed with Hamas on elections in 2014 and 2018 and nothing happened.

There are two impossible challenges to overcome, which Abbas knows quite well.

One is that Hamas will insist that any elections include voting for members of the Palestine National Council, which is not a body of the PA but the legislative arm of the PLO.

The PA reports to the PLO. The PLO is where all the power is, and Abbas is the chairman. Members of the PNC aren't elected but appointed - by Abbas' party Fatah.  At the last PNC meeting last year - the first such meeting since 1996 - Abbas filled the PNC's Executive Council with loyalists.

The PLO is not a democracy by any definition. Abbas will never allow members of the PLO's PNC to be elected because he has absolute power over it.

The other challenge is that Abbas is insisting that Arabs in Jerusalem be allowed to vote - in Jerusalem. Israel will not allow that to happen. Of course, Israel cannot stop them from traveling to Area A or B where they can vote - Jerusalem Arabs are the only people in the world who can freely travel to both Israel and the entire West Bank. But the PLO wants to use this pretense of elections as a political weapon to pressure Israel to give up some sovereignty over Jerusalem.

In other words, getting Israel to cede even a little sovereignty is more important than holding the elections.

Today, we are already seeing the backtracking from Fatah. Jamal Muheisen, member of Fatah Central Committee, said there are "obstacles" to a presidential decree on elections, blaming Hamas for not agreeing to certain administrative details. The other obstacle is that the PLO is contacting friendly countries to pressure Israel to allow voting for Palestinian elections in areas that Israel considers part of Israel.

This election sham also proves that Abbas is a liar in another way:

After the last elections in 2006, Abbas promised he won't run for re-election.

Yesterday, Fatah spokesman Osama al-Qawasmi said, “We confirm that our candidate is President Abbas in any upcoming presidential elections.”

Why does the media still believe anything this man says?


We have lots of ideas, but we need more resources to be even more effective. Please donate today to help get the message out and to help defend Israel.
Elder of Ziyon at Thursday, October 31, 2019
‹
›
Home
View web version