I reported last week about PLO representative to the UK, Husam Zomlot, giving a speech in Berlin where he admitted that Palestinians never wanted to a state in anything less than 100% of the land from the river to the sea.

He's very proud of this speech where he brags about Palestinian intransigence. His Facebook timeline shows the same video of his speech over twelve times!

Zomlot used to be the PLO representative to the US before that mission was closed down. The US never recognized the PLO as a state, but the PLO falsely referred (and still refers) to him as an "Ambassador."

You know who else referred to him falsely as an ambassador? 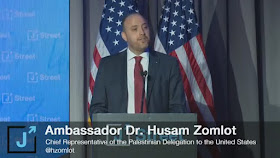