Palestinian official says ties to Israel are being cut - citing stopping medical transfers as #1 on the list! 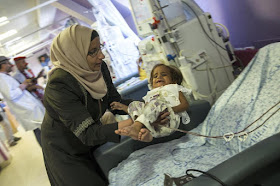 The Secretary of the Revolutionary Council of Fatah, Majid al-Fatiani,  said on Sunday that the Palestinian government has already begun a series of measures to gradually disengage from the Israeli occupation, taking into account the interests and needs of the Palestinians, as Mahmoud Abbas said he would do last week.

There has been skepticism about whether Abbas will actually do anything new.

Fathini, speaking to  Voice of Palestine radio, said the PA is trying to end the economic relationship with Israel, and gave as his first example stopping medical transfers of patients to Israel.

Yes, the first thing the benevolent PA decides to do to cut ties is to screw the people who need Israel the most!

Of course, this decision was made back in March. Even then the Palestinian Ministry of Health said that the decision was difficult for patients as it was left to scramble for adequate facilities in Egypt, Jordan or in private Palestinian hospitals to handle the patients.

At that time, the decision was framed as a punishment for Israel, but it saved the PA a hundred million dollars a year.

In other words, the PA wants to appear independent from Israel and the very first way it decides to do that is to throw the people who need Israeli help the most under the bus - for "dignity" reasons.

What could be more dignified than to make the principled decision to sacrifice other people's lives for your cause?

We have lots of ideas, but we need more resources to be even more effective. Please donate today to help get the message out and to help defend Israel.
Elder of Ziyon at Monday, July 29, 2019
‹
›
Home
View web version