The Levels of Hypocrisy in BDS - And Will You Have Fries With That? (Daled Amos)

In a recent post, Elder of Ziyon pointed out an ignored truth about the campaign to boycott Israel: BDS isn't about boycotts. It is about turning Israel into a pariah state.

Even BDSers admit that they choose their targets of boycott for maximum leverage and publicity, even as they use Israeli products themselves. The boycotts are indeed a sideshow to their real aim - to have average people associate Israel with racism and apartheid.

By repeating the lies that Zionism is racism, Israel is an apartheid state, Israel must be boycotted for human rights abuses, and so on - over and over again - it makes an impression on college students and people who don't follow Israel closely.

When an artist boycotts Israel, it makes a huge impression on people who want to identify as supporting social justice.

When an academic group calls to boycott Israel, it puts an aura of respectability on hating Israel.

BDS is a tactic, it is not a movement whose goal is to remake Israel as the previous boycott movement was capable of forcing change on the level it did with South Africa.

And the strategy behind that tactic is publicity.

Now more than ever, especially in the age of social media, it is possible to reach people without having to engage the mainstream media, who in the past were the gatekeepers who could to a larger degree control who got access to the public audience.

Recently on Twitter, it was pointed out that both Rashida Tlaib and Ilhan Omar -- vocal supporters for boycotting Israel -- used Israeli technology, Wix, for their website: 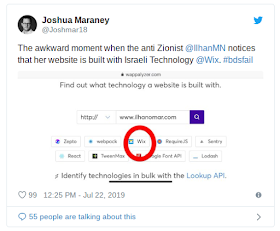 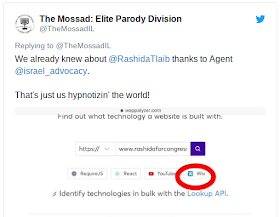 But the fact that Tlaib uses Wix for her website was already pointed out back in February. This fact made the rounds back then, and to a lesser degree it has been pointed out now. But the fact that Tlaib has not bothered to redo the website means that other than perhaps metaphorically tweaking her nose, this apparent hypocrisy means nothing to her.

But back in November 2015, the Times of Israel reported that when it was pointed out that the Students for Justice in Palestine at the University of Denver used Wix for their website -- the students defended their actions and claimed to explain why this was not hypocritical


By combining the power of many around the world, boycotts shine a harsh light on Israeli settler-colonialism. Whereas Israel wishes these networks to remain inconspicuous, the BDS campaign uses the power of an organized consumer boycott to expose them, forcing the recognition of our different forms of connection with oppression and the oppressed. When we participate in an organized boycott of Israeli consumer goods, such as Sabra and Tribe hummus (whose owners financially support Israeli institutions of occupation and dispossession) or SodaStream kitchen appliances (made in illegal settlements under conditions of hyperexploitation), we choose to make visible the connections between Palestinians living directly under Israeli occupation and people living elsewhere. With these organized boycotts, this global economic structure, a largely hidden network of financial pipes and tunnels, acts as unwitting accomplice to members of Palestinian civil society in their call for self-determination. Boycotts therefore form a limited but necessary component of the BDS campaign. For supporters of the Palestinian call for BDS, boycotts serve as a tactic within a wider strategy to pressure Israel to change its policies and end its oppression. [emphasis added]

The reference to SodaStream reminds us that this same logic that allows the BDS movement to use Israeli products while boycotting them -- also allows them to put Palestinians out of work for 'the cause' as well.

Putting Palestinians into financial distress through BDS boycotts is only for their own good.

How widespread is this use of Israeli products by members of BDS? Consider Omar Barghouti, one of the BDS leaders.

He has a degree from Tel Aviv University, a blatant and rather public contradiction for someone supposedly embodying the BDS movement. He has been confronted with this on a number of occasions, and while Barghouti has offered a variety of excuses, he never quit the university -- or burned his degree in public.

But the BDS movement has given Barghouti lots of publicity, and any occasional questions about his hypocrisy have not slowed him down.

He falsely claims that he could not have gotten a degree any other way.
Tlaib could have used any number of other products to make her website.
Neither has confronted the contradiction head-on as the SJP students in Denver - and while that article in Times of Israel reports the students' use of Wix in November 2015, the group's explanation is dated November 2013.

Still, it is not hard to figure out that Wix is an Israeli product.
And it is not as if there are not lots of other products that could make a website just as well.

These days, that SJP site uses WordPress.
Maybe that hypocrisy finally caught up with them.

An article in Haaretz earlier this year addresses the larger hypocrisy in the BDS movement:


When push comes to shove, its activists prefer that others do the boycotting and make the sacrifices. Thus Caterpillar and in the past the security company G4s have been popular targets because, after all, how many ordinary people are going to ever be buying a earthmover or employ a security guard? It’s likewise painless to ask a university’s trustees or a big pension fund to divest Israeli shares from their portfolios because that’s someone else’s money.

The requirement to fight the good fight against Israeli oppression is supposed to be borne by others whether they are big, anonymous institutions or useful idiots who take the boycott call seriously. Meanwhile, a boycott campaign is being managed using Israeli website building tools. In the words of SJP Cornell, “BDS is not abstention, nor an absolute moral principle … it is a tactic.”

And again, it is not just that the fight is borne by others, the effects have been borne by the actual people the BDS movement claims to be helping -- as in the case of the Palestinian employees of SodaStream.

These boycotts are not limited to big companies either. Boycotts of performers going to Israel are always guaranteed to draw attention -- and are sometimes successful.


A franchisee has delayed the scheduled opening of his Burgerim restaurant in Dearborn amid backlash from the Arab-American community over the popular burger company’s Israeli roots.

Sam Zahr, a Lebanese-American who lives in Dearborn, said he was too worried to open the restaurant on Greenfield Road after his kids were bullied and he received threatening messages from those opposed to the burger chain founded in Israel.

...A Burgerim location in Royal Oak also owned by Zahr has not experienced as much opposition, he said.


It's not clear if the issue is only boycotting or maybe also a desire to squelch any hint of normalization.

Based on Zahr's success in Royal Oak, maybe an Arab-Israeli business can make it in the US.

Burgerim seems to think so:

BDS can go ahead and make their claim to success.
Israel is opening up new battlefields.

Those SJP students say that BDS is more than a tactic; it sheds a light and sends a message.

Burgerim, an Israeli company, is sending a message too:


We have lots of ideas, but we need more resources to be even more effective. Please donate today to help get the message out and to help defend Israel.
Elder of Ziyon at Monday, July 29, 2019
‹
›
Home
View web version