If anti-Zionism isn't antisemitism, why did Arabs recruit Nazis in 1948?

Continuing my review of the Palestine Post articles from 75 years ago, we see this interesting piece from January 2, 1948: It turns out this was far from the only reporting in 1948 of close cooperation between Arabs who wanted to murder the Jews and the Nazis who were experts on the topic.
January 6: 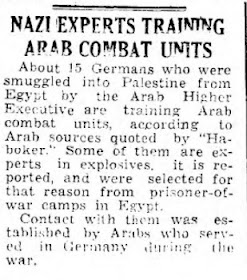 Arab agents are today recruiting mercenaries to fight against the Jews in Palestine from among the Yugoslav Ustashi and Chetniks and the Ukrainians, Albanians, Circassians (former inhabitants of the northwestern area of the Caucasus) and other groups here who were on Hitler’s side during the war, and are now under the care of the International Refugee Organization.
Able-bodied men, both inside and outside the I.R.O. camps, who are between 22 and 32 years of age, and who accept the Arab terms of payment–their fares to the middle East and maintenance of their families in exchange for their pledge to serve in the Arab forces for at least one year–are being given visas by the governments of Egypt, Syria and Transjordan. Where the mercenaries are of Moslem origin they are being officially resettled” by formal negotiations between the governments concerned and the I.R.0. which, however, disclaims any knowledge of what use the individuals are put to on arriving in the Middle East. 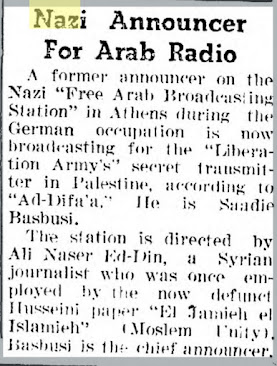 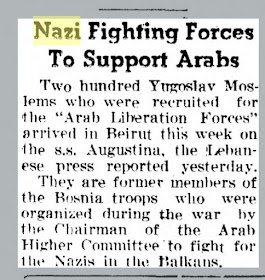 Several hundred former members of the Nazi Prinz Even, Division, recruited by Egyptian authorities in Austria as farm workers, immediately upon their arrival in Egypt joined the Arab Legion of Transjordan and departed for the Palestine front to fight against the Jews, the Socialist newspaper Well Am Abend reported today.
The newspaper charged that Dr. Ismail Hassan, Egyptian representative in Austria, toured the U.S. zone several weeks ago and succeeded in obtaining exit visas for the several hundred, most of whom were Bosnian Moslems and held the rank of major to the Prinz Eugen Division. The disclosure of the identity of the men followed the capture of several of them by the Israeli forces, Welt Am Abend stated.

There is surprisingly very little literature about the Nazi contribution to the 1948 war.. There are lots of books about Arabs collaborating with Nazis during World War II,, and more with the false accusations of Zionists collaborating with Nazis, but I cannot find any on Nazis collaborating with Arabs after the war.
The most comprehensive account I could find was a contemporaneous article by International News Service correspondent Kenneth Dixon written on February 22, 1948, where he viewed the evidence of the Palmach from papers on captured Nazis as well as German-style fighting techniques from Arab soldiers.

Barry Rubin and Wolfgang G. Schwanitz, in their 2014 book "Nazis, Islamists, and the Making of the Modern Middle East," have one chapter on "The Arab States' Useful Nazis." It does not talk about the Nazi role in the 1948 war, but they note that the number of Nazi officials that escaped to Arab countries dwarfed the number that fled to South America - over 4,000 Nazis officials in Arab countries (some estimate over 6,000)  compared to less than a thousand in Latin America. (And many of those who fled to South America later relocated to the Middle East.)
The authors say  (p. 216)  that a few years after World War II, the Allies were unenthusiastic about seeking out Nazi war criminals for punishment. They then acidly note that "the only ones who seemed to be avidly seeking to find Nazi war criminals were Arab governments who wanted to offer them jobs."
This is all after the Nuremberg Trials when Nazi crimes were well known. The Arab leadership at the time were attracted, not repulsed, by the details of the Holocaust.
If Arabs were not antisemitic, then why did they so enthusiastically recruit known Nazi war criminals for their war against Israel?
And if leftist "anti-Zionists" today abhor antisemitism, why have they remained so silent when confronted with countless stories that prove Arabs have been enthusiastic antisemites? Why can one not find virtually any condemnation of Arab antisemitism from these social justice warriors?
Because they share the same mindset as the Arabs who recruited Nazis in the 1940s.
Elder of Ziyon at Monday, January 02, 2023
‹
›
Home
View web version