The planned mass incursions into the Al-Aqsa Mosque, orchestrated by Israeli settler groups under the cover and protection of the hardline right-wing Israeli occupation government to mark the so-called Hanukkah holiday, constitute a dangerous development aimed at provoking the feelings of the Palestinian people and of all Muslims.
We hold the Israeli occupation government fully responsible for the repercussions of such raids and provocations. We emphasise that such policies and incursions threaten to explode the situation in the face of the Israeli occupation and colonial settlers.
We call on the Palestinian citizens of Jerusalem, the West Bank, and the Palestinian territories occupied in 1948 to defend the Al-Aqsa Mosque by intensifying their presence at the Muslim sacred compound in order to foil all schemes intended to impose a new fait accompli and divide the Al-Aqsa Mosque temporally and spatially.
The Palestinian people will continue to defend the Al-Aqsa compound with all means possible and at any cost.

In Arabic, of course, they are even more strident in their threats.

Abu Obeida, the military spokesman for the Martyr Izz al-Din al-Qassam Brigades, the military arm of the Islamic Resistance Movement Hamas, called on the masses of our people and our nation to mobilize to protect the blessed Al-Aqsa Mosque in the face of the continuous crimes of the occupation, stressing that the battle with the occupation is long, extended, complex and has multiple fronts, mechanisms and means.

Today, Sunday, Abu Obeida stressed that the occupation's threats about the further storming of Al-Aqsa are serious, and indicate the nature of the criminal structure that came to power in the entity, adding, "This requires a state of alert for our people and our nation to protect the place of their Prophet from this miserable fragmentation."

He stressed that the battle of Saif al-Quds (2021 Gaza war) was the detonator that exploded latent energies and removed the ashes from blazing embers in the occupied West Bank, Jerusalem and occupied Palestine in the year 48, and was an inspiring model.

Abu Obeida called on our revolutionary youth in the West Bank, Jerusalem and the occupied Palestinian interior, to continue to escalate the resistance against the occupation and settlers, stressing that the extended and escalating resistance movement is the natural state to respond to aggression and establish the next liberation stage.

He added, "We are facing a battle of existence, right, history, and the future, but victory is an hour's patience, and if the martyrs are planted despite the pain, a revolution and a real victory will grow." 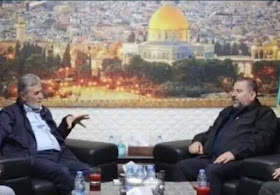 Leaders of Hamas and Islamic Jihad met in Lebanon, somehow escaping the Gaza "open air prison" whenever they want to, and they included threats to Israel for Jews visiting the Temple Mount:

The two parties emphasized joint cooperation in strengthening and activating the resistance of our people in all of Palestine in the face of the Zionist occupation and criminality, especially in the West Bank, and to confront the Zionist plans that seek to undermine the resistance and liquidate the Palestinian cause, the aggressive threats targeting Jerusalem, and the repeated storming of the blessed Al-Aqsa Mosque.

The inflammatory and inciteful rhetoric isn't only the domain of Hamas and Islamic Jihad terror groups. Jordanian officials joined the anti-Chanukah, anti-Jewish party:

Secretary-General of the Royal Commission for Jerusalem Affairs, Abdullah Kanaan, confirmed that the concept of holidays is usually associated with peace, unlike what is happening in occupied Palestine, which activates and intensifies the Israeli attacks and incursions against the Islamic and Christian sanctities in the city of Jerusalem.

He said that the Jews perform alleged rituals related to their festivals in a way that threatens the blessed Al-Aqsa Mosque directly,  and makes the idea of ​​​​demolishing the blessed Al-Aqsa Mosque and establishing the alleged temple in its place a sacred religious principle, as is the case in the doctrine of the holiday (Hanukkah), which provokes the feelings of Muslims and Christians whose sanctities are also exposed. It clearly shows the occupation's plans to Judaize Jerusalem, and efforts to change the existing historical situation, which endangers peace and security in the region and the world.

The Ammon News site then goes on a bizarre, antisemitic reading of history, not only denying Jewish history itself but then blaming Jews celebrating Jewish holidays for Arabs slaughtering Jews:

Today, Sunday, the Jews began their celebrations of the Hanukkah or Lights)festival, which is a celebration to commemorate the so-called alleged temple, and to restore freedom of worship to the Jewish people after the success of the popular revolution led by Judah Maccabee and his brothers, according to legends on which they built their fabricated beliefs, and at the same time they oppress Muslims and Christians in the occupied territories to prevent them from celebrating their festivals.
The Jewish holidays, including Hanukkah, are dominated by the nature of violations and assaults in alleged religious dress, which creates a difficult and even dangerous reality for Jerusalemites by preventing them from freedom of worship, and the exercise of economic and social activities, due to checkpoints, closures, holding Talmudic prayers, lighting candlesticks, and incursions by herds of settlers under protection and direct participation of the Israeli police and army.
It is noteworthy that the Zionist gangs carried out an attack during the Prophet Musa season on 4/4/1920 under the pretext of celebrating the Jewish Passover, and on 8/15/1929, which coincided with the celebration of the Prophet’s birthday, they attacked the Palestinians under the pretext of celebrating the day of the alleged destruction of the Temple, so that occupied Palestine would witness the Buraq Revolution.

This isn't "anti-Zionism." This is Jew-hatred, and anyone who denies this simple equation supports it.