Israel giving up its maritime rights under pressure from Biden

On August 31, Yair Lapid and Joe Biden held a phone call. Afterward, the offices of both men issued a press release, as is customary, but used different language. Hiding in the White House version was a story that was missing from the announcement of the Prime Minister’s Office: “The President also emphasized the importance of concluding the maritime boundary negotiations between Israel and Lebanon in the coming weeks.” In other words, Biden simply told Lapid he was fed up with the delays, and was sending his envoy Amos Hochstein to the region to complete the deal and enable the development of Israel’s Karish and Lebanon’s Qana natural-gas fields.

The specifics of the deal are still under wraps, but this comparison of two maps in Lebanese media show how Israel has been making concession after concession and the Lebanese keep gaining.
This map from June shows a curved border that would allow Lebanon to keep the entire Qana field but would give Israel other portions closer to its position of claiming Line 1.

Abu Ali Express publishes a map from Lebanese media today showing that not only does the border adhere to Lebanon's original claim of Line 23, but it even goes into what no one doubts is Israeli territory.

This isn't compromise - it is capitulation.
Moreover, while Lapid is claiming that Israel will share in the profits of the Qana field, the Lebanese are insisting that no such deal is possible.
Haaretz says that Hezbollah is not the reason Israel is compromising, but the Lebanese are saying that Hezbollah's threats are part of their "unified position" that helped them achieve pretty much everything they wanted.
Haaretz adds:

Biden wants to keep Western countries united on the side of Ukraine in its war with Russia. He fears his European allies will break under the Russian economic pressure, with Europeans freezing this winter without the gas from the crippled Nord Stream pipelines. Any addition of oil or natural gas to the global market will give the Americans more breathing room, which can be translated into military aid for Ukraine. It’s why Biden wanted a new nuclear accord that would have lifted sanctions and increased energy exports from Iran. It’s why Biden visited Israel and Saudi Arabia in July. It’s why Biden is under pressure to complete an accord that will allow for the production of gas in the eastern Mediterranean. It’s obvious that these gas fields will not satisfy the European demand for energy, certainly not immediately – but their development will send a positive signal to a nervous market.

Keep in mind that the US withdrew support for the EastMed gas pipeline that would allow Europe to access Mediterranean gas fields soon before Russia's invasion of Ukraine. Check out this press release from the American Energy Alliance from January 26: 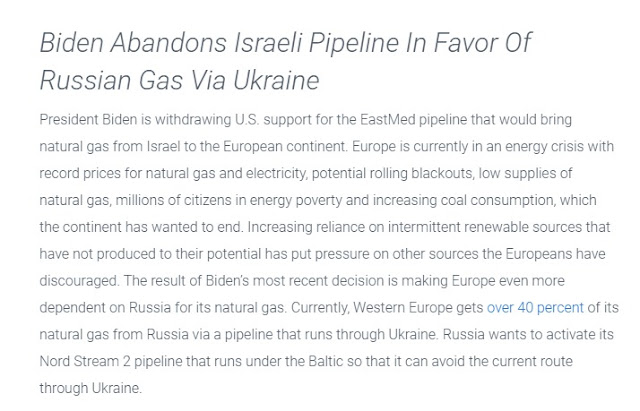 If providing Europe with natural gas is such a high priority, one would think that this would be reconsidered - especially to compensate Israel for the lost land being imposed. But I haven't seen that.