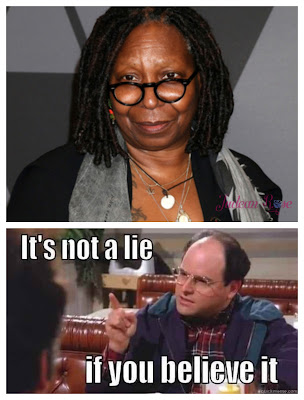 Whoopi Goldberg really needs to stop talking. Preferably altogether, but certainly when it comes to talking about Nazis and the Holocaust.

First she said Nazis were white people attacking other whitepeople. That was in February.

Now, only six months later, Goldberg has lumped the members of a conservative student association with neo-Nazis after the latter protested outside a Turning Point USA (TPUSA) summit last week. Goldberg falsely asserted that TPUSA allowed the protesters into their event, and was therefore “complicit.” “You let them in and you knew what they were, so you are complicit,” she said.

Except that never happened. TPUSA never let these horrible people into their summit. TPUSA security, in fact, made every effort to disperse the neo-Nazi protesters. Since the protest took place on a public sidewalk, however, security was unable to remove them.

TPUSA participants themselves went out and confronted the demonstrators, but could not persuade them to leave. Only after the TPUSA students gave up and entered the building for their event, did the protesters at last quit the scene.

This was all easily verifiable. Today, everything is verifiable. Because everyone has a phone, duh.

But Whoopi, of course, has absolutely no interest in verifying what happened or in learning the truth. Her only interest is to demonize those who are different from her, in this case, conservatives. Goldberg took one small piece of information—the fact that neo-Nazis protested outside the event—and embroidered it to suit her narrative, claiming that TPUSA welcomed the protesters, something that never occurred. Then Goldberg broadcast the slanderous falsehoods to the world, leading her audience to believe that conservatives in general, and Republicans in particular, are in fact, neo-Nazis, and share the same Nazi beliefs.

Even if we are to give Goldberg the benefit of the doubt that she received bad information—that someone did, in fact tell Goldberg that TPUSA let the neo-Nazis into their event, it was Goldberg’s job to verify the story before blabbing it to the world. But Goldberg—or rather Caryn Elaine Johnson, Goldberg’s real name—already knows that she can libel anyone she likes: Jews, conservatives, Republicans, and whites, and nothing much will happen to her. At most, she’ll eventually be forced to give a lackluster apology and perhaps receive a short suspension. All worth it for the ability to continue spreading her toxic and xenophobic views to her idiot audience of millions.

After Goldberg’s obnoxious comments of last January, in which she described the Holocaust as white people fighting each other, “This is white people doing it to white people, so y'all going to fight amongst yourselves,” she apologized the next day, and received a two-week suspension.

This time, Goldberg qualified her comments later in the same show, saying “My point was metaphorical.”

It was only after TPUSA issued a cease and desist letter to ABC, threatening legal action, that anyone bothered to apologize for all the vicious lies spread not just by Whoopi but other cast members of The View, for example Joy Behar, who told  the audience that Florida Governor Ron DeSantis “did nothing” to stop the protesters. DeSantis had attended the event a day earlier, when no demonstrations were taking place. But what does The View care about the truth?

But back to the apology, because it was too slow to come and even when it did, it didn’t begin to address the malignant nature of the on-air defamation. The slander took place on a Monday. The apology, which was not really an apology and didn’t come from Whoopi, came only on the following Wednesday, in the form of a legal note read on air by The View co-host Sarah Haines:

UPDATE: The View has issued yet another formal correction to TPUSA and its students LIVE on air. The apology was issued by Sara Haines. Whoopi remained silent and has not retracted her comments that TPUSA “metaphorically” embraced “Nazis." https://t.co/rcTawUTbpX pic.twitter.com/rANUlmXZwO

In other words, The View doesn’t apologize for its assertions, only that said assertions should have been clearer.

TPUSA was not at all satisfied with the on-air reading of a legal letter by Haines, nor should it have been. According to Fox News, “A TP spokesperson balked at Haines, not Goldberg, making the apology.”

The lame, forced apology from Goldberg, such as it was, came only one day later, a full three days after she broadcast her libelous claims. “You know, in Monday’s conversation about Turning Point USA, I put the young people at the conference in the same category as the protesters outside,” said Goldberg. “I don’t like it when people make assumptions about me, and it’s not any better when I make assumptions about other people, which I did. So my bad. I’m sorry.”

WATCH: @TheView's Whoopi Goldberg apologizes for lumping in @TPUSA attendees with the neo-Nazis that protested outside TPUSA's summit pic.twitter.com/PJeGsx4uWp

Even now, Goldberg-really-Johnson apologizes not for her calumny, as she should, but for mistaken assumptions. In so doing, Goldberg/Johnson has minimized her vilification of a student organization as some minor error in understanding, rather than a wholesale effort at character assassination. In such an apology, there is no mistaking the insincerity of the supplicant. This is not ignorance, but hate.

Not that it matters. Caryn Elaine Johnson’s audience laps up every lie she feeds them, even begging for more. And anyway, she can always apologize some more or take a two-week vacation.

Exploiting the Holocaust and Nazi ideology to serve her own egocentric interests? Why not? What does she care about a mess of "white" people, fighting?

And anyway, nothing really happens to her when she says these things. People like her, and listen to her. So she stays.

For her, it’s a win-win situation. Johnson/Goldberg can say what she likes with impunity.  And cry all the way to the bank.