The other Abraham Accords benefit that the progressives won't talk about: Far less antisemitism in the Arab world 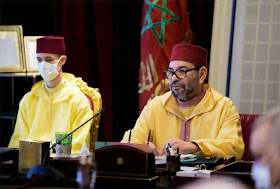 On Wednesday, Morocco's King Mohammed VI chaired a meeting of the Council of Ministers. A remarkable thing occurred:

At the end of the Council's proceedings, the Minister of Interior made before His Majesty the King, may God preserve Him, a presentation on the measures elaborated, pursuant to the High Royal Instructions on the organization of the Moroccan Jewish community.
These measures are based on the supreme responsibility of His Majesty the King as Commander of the Faithful and guarantor of the free exercise of worship for all Moroccans, all religious confessions included, and come to enshrine the Hebrew tributary as a component of the Moroccan culture rich of its multiple tributaries.
The scheme submitted to the High Appreciation of His Majesty the King, drawn up after extensive consultations with representatives of the Jewish community and personalities belonging to it, includes the following bodies:
1- The National Council of the Moroccan Jewish Community:
It is responsible for managing the affairs of the community and safeguarding the cultural and religious heritage and influence of Judaism and its authentic Moroccan values. Regional committees of the Council will be responsible for managing the day-to-day issues and affairs of the community's members.
2- The Committee of Moroccan Jews living abroad:
It works to consolidate the ties of Moroccan Jews living abroad with their country of origin, to strengthen their cultural and religious influence and to defend the supreme interests of the Kingdom.
3- The Foundation of Moroccan Judaism:
Its mission is to promote and watch over the Jewish-Moroccan intangible heritage, to safeguard its traditions and to preserve its specificities.

King Mohammed VI was always sympathetic towards his Jewish subjects, but until the Abraham Accords he couldn't have allowed an organization for Moroccan Jews abroad - for the simple reason that most of them live in Israel.
This brings up an additional benefit of the Abraham Accords: it has significantly reduced the amount of antisemitism in the media of Gulf countries and Morocco.
The ADL's polls from 2014 in the states most affected by the Abraham Accords indicated that in Morocco, 80% of the citizens held antisemitic attitudes; UAE 80%, Bahrain 81%, Saudi Arabia 74%, Oman 76%.. The Palestinian territories was 93%.
Until there is a new survey, we won't know how much the Accords have reduced Arab antisemitism, but it is a fair bet that with fewer antisemitic articles and stories in the media - and far more stories sympathetic to Jews - the attitudes of the citizens will be positively impacted towards Jews.
The progressives who never admitted that there was an Arab antisemitism problem likewise will not admit that reducing Arab antisemitism is a clear win from a human rights perspective. They try to spin the agreements as if they are somehow making human rights worse for the Arab signatories, when in fact when they are more favorably disposed towards Jews they are also more open to all non-Muslims.