Here is a video from Jenin journalist Ali Samoudi which he uploaded to Facebook only minutes before Shireen Abu Akleh's death.
Abu Akleh was killed at about 6:30 AM. This video was uploaded to Facebook at 6:22 AM.  (Update: See below, the video was uploaded to Telegram around 6:15.)
You can hear at least 9 loud gunshots (and 4 that might be echoes or might be more distant gunshots) in the 17 seconds of the video. Those 9 gunshots are clear enough, and loud enough, to indicate that they were shot from the same rooftop as the camera. (UPDATE: this is wrong. See below.)
The video shows the spot that Abu Akleh was going to be killed.
Here is the scene from the video, showing where the landmarks are on the map. 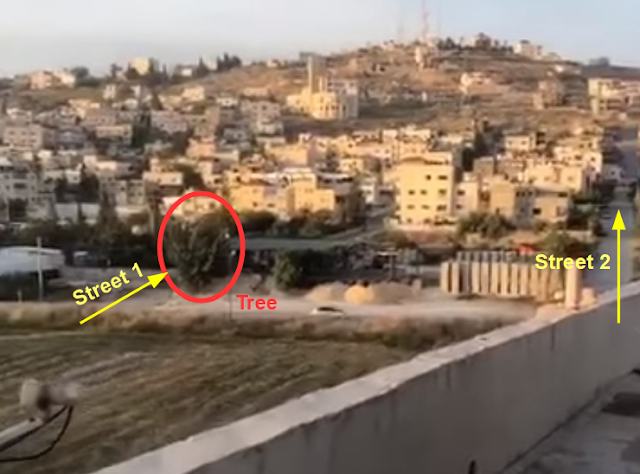 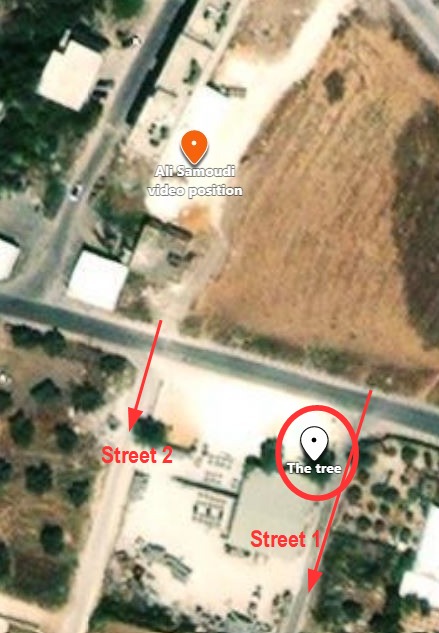 The video was taken from roof of the building on the right; the tree that she was in front of is on the left in this Mapillary photo:

This sniper did not kill Shireen Abu Akleh. He is only 75 meters away from her, and we know that the gunfire that killed her was about 180 meters away from the intersection near her.
But we can learn a great deal from this video nonetheless.
It proves beyond the witness testimony we have seen so far that there were indeed Palestinian snipers on the roofs of buildings in Jenin.
It proves that at least one of these snipers were much closer to Abu Akleh than the IDF was. Together with the witnesses we have seen pointing out or saying they saw other snipers, this is further proof that there were Palestinian snipers all over the area.  CNN and Bellingcat's investigators do not mention this fact, leading them to say that the IDF was the most likely shooter and not even mention the many other gunmen we have evidence for.
It proves that the Palestinian snipers are trigger happy. The IDF is not visible in this video, but it is in the general direction beyond where Shireen Abu Akleh was (215 meters down Street 1.) The gunmen who were nowhere near the IDF shot in that direction anyway. They are "shebab," youth, who want to prove how macho they are with their M-16s so they are firing towards anything that they feel like. Is it really so difficult to imagine that another similarly hotheaded terrorist saw Shireen's helmet poking above the brush from the southeast and fired volleys of bullets towards her immediately, imagining her to be IDF?
Moreover, the contrast between these youths with their beloved and iconic M-16s and a professional army like the IDF could not be starker. It is infinitely more likely that untrained, hotheaded and trigger happy youth would fire at anything that moves than that the IDF would target journalists in the middle of an operation. That simple fact does not even enter into the calculus of the "investigators" because they have a bias against the IDF, assuming that IDF soldiers act worse than the Jenin shebab.
I don't know if Ali Samoudi took this video himself or if he obtained it and uploaded it. He was close enough to have descended the three flights of stairs and go to the intersection in the 8 minutes or so before he himself was shot. Either way, this video indicates that Samoudi - a trusted eyewitness to the media - had either hung around the snipers himself or he is friendly with the videographer who apparently shared a rooftop with a trigger happy militant.
What is clear is that the sniper we hear in this video was not IDF and was shooting in the general direction of where the reporters were to be.
Finally, it proves that the open source investigations of Bellingcat, AP and CNN only covered a tiny percentage of the action in Jenin during the timeframe between 6:15 and 6:40 AM. They represent themselves as if they have all the relevant information to determine that the IDF is the likely shooter, but their information is are not even close to what the actual events were, especially their assertions that there were no Palestinian gunmen closer to where the reporters were than the IDF was. The constant gunfire that can be heard in this and other videos prove that there are far more gunmen shooting wildly than have been caught on video.
Viewed objectively, the overwhelming evidence indicates that Shireen Abu Akleh was killed by Palestinians.
UPDATE: Tal Hagin points out a similar video from the same vantage point that was uploaded around 6:05 AM to the Jenin camp Telegraph group:
The Ali Samoudi video was on that same channel at 6:15 AM.
The Ali Samoudi video gunshots are much more pronounced and clear than in this one, where they could conceivably be from other (relatively nearby) sources.  This seems to indicate that he wasn't there himself. I still think the Ali Samoudi uploaded video makes it sound like the snipers are on that roof, or very close by, and shooting from a great distance towards very unclear targets.
UPDATE 2: Some have pointed out that there is no direct evidence of gunmen on this roof, and this is true. I assumed that the clarity and loudness of the gunshots in the video indicates that gunfire was very close by, but it is possible that distant gunfire from other elevated positions might be amplified by the microphone.
UPDATE 3: I asked the Montana State University professor what he thought of the audio. He said that when a gunshot is nearby, the audio has a loud sound that fades away consistently. These were much more muddled and seemed to include echoes. He does not believe that these gunshots were very close to the mic, so in this case my assumption is wrong.
Elder of Ziyon at Tuesday, June 07, 2022
‹
›
Home
View web version