Jezebel had an article recently about Palestinian female prisoners and how awful their lives supposedly are behind bars. 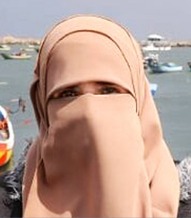 Written by Wafa Aludaini, a Gaza activist, the entire article praises these prisoners as it describes their supposed plight. And they are all wonderful people:

Far from the eye of international media, 32 Palestinian women are currently political prisoners languishing in Israeli occupation prisons, according to Addameer, a Palestinian NGO that monitors the treatment of Palestinian prisoners and offers legal support. Behind the walls of Hasharon and Damon in Israel wait mothers, students, journalists, teachers.

Oh, they also happen to be terrorists.
The article never describes the crimes that put them in prison to begin with. They are innocent lambs, all 32 of them.
There is one exception, which shows how little Jezebel cares about fact checking- the story of Israa Jaabis:

On October 11, 2015, Israa was transporting some household items to her new home near her place of work in Jerusalem. On that fateful day, she was carrying a gas cylinder in the car, according to her sister Mona Jaabis. As she headed down the road towards an Israeli checkpoint, the gas canister burst into flames. The car’s airbag activated, causing an explosion. Israa ran out of the car, calling for help from the Israeli police manning the checkpoint. But the police summoned more security, and asked Israa to enter the burning car, causing her to suffer severe burns that have greatly affected her mobility. She was arrested and given an 11-year sentence for attempted murder; Israeli authorities claimed she intended to explode the car. No evidence was presented, and she vehemently denied the charges.

On Oct. 11, 2015, Israa Jaabis, 31, was en route to her home in Jerusalem, about 500 meters away from the A-Zaim checkpoint in Jerusalem's eastern suburbs on the road from Ma'aleh Adumim. Stopped by a police office for suspicious driving, she exited the vehicle.
"The driver then shouted 'Allah Hu Akbar'  and detonated an explosive device," a police spokeswoman said. The rigged cooking gas cylinder inside the car caused the vehicle to burst into flames.
Security forces found hand-written notes in her possession that contained messages of support for "martyrs," a euphemism for those killed in the commission of a terrorist act.

Her cousin was involved in a tractor attack the year before.
The police officer who stopped her was burned by the explosion.
These women are terrorists and Wafa Aludaini knows it. This is a propaganda piece. Aludaini's Twitter feed includes conspiracy theories that have no basis, like Israel is planning to build a synagogue on Al Aqsa or that Israel shoots "acid bullets" to further hurt the people they shoot.
She is so extreme that she bragged three times that she was tweeting to support Al Aqsa with one hand while taking care of her sick child with her other:

Anyone who thinks that tweeting is equally important to caring for a sick child is despicable. Her tweets aren't "saving Al Aqsa." This is demonstrative garbage to make her feel righteous while ignoring her kid.
And the idiots at Jezebel eat this stuff up.
Elder of Ziyon at Thursday, June 23, 2022
‹
›
Home
View web version