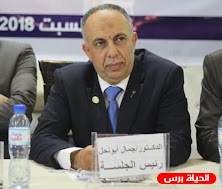 Dr. Jamal Abu Nahl, a regular columnist for the Palestinian Al Hayat Press agency - aligned with the PLO - published a screed against Jews on Wednesday. Excerpts:

A great shock hit the world after the killing of the Palestinian journalist Shireen Abu Akleh, by the bullets of the Nazi Zionist occupation army gang, especially since this crime is added to the black record of the crimes of the occupation, which is full of heinous crimes and massacres.
But it is not the first crime of this murderous, criminal occupation, because their black and bloody history is filled with a sea of ​​blood, massacres, and murders that still continue on a daily and continuous basis.
The Holocaust of the Jews is a Zionist fabrication that was exaggerated in the media in order to sympathize with the world at that time, to help them establish the Zionist entity on the Palestinian national soil, and on the ruins of the Palestinian people, to be a poisoned dagger in the heart of the Arab world, and a guard dog for the interests of the West in the vicinity of the countries of the Arab Ring!  Yes, the Holocaust was a fabricated story by killing a Jew at the hands of another Jew in order to facilitate the rape and occupation of Palestine!
The Jews are historically famous for their treachery and bloodshed! ; That is why the Jewish Hitler killed his fellow Jews - and for this, the Jews went crazy from the statement of Russian Foreign Minister Sergey Lavrov, and considered him to have committed a major crime, a Jewish religious and historical taboo by saying: “Adolf Hitler has Jewish blood”; And the senior Russian political minister's allusion to the Jewish Hitler's involvement in the crime against the Jews is considered a blow to the Jewish-Zionist narrative based on the tragedy of the "Holocaust", to be a justification for your global sympathy in order to contribute to the establishment of the Zionist occupation entity!
To satisfy the Zionists, Western governments imposed the inclusion of the "false Holocaust" history to be included in their educational curricula! Likewise, it enacted laws that incriminate and criminalize those who doubt it, and even punish those who commit any attempt to “review history” and verify this or deny the existence of the “Holocaust” and face severe deterrent punishments, up to murder, assassination, and execution!

This is not a very unusual article.
As always, the issue isn't one article written by one hateful little man (who lists a large number of credentials.)
It is that not a single Palestinian ever stands up and dissociates himself or herself from this hate.
Amusingly, Al Hayat Press describes itself this way:

We do not monopolize the truth, and we believe that every issue has two sides, so we will open our pages to all directions without discrimination, and we will respect the other opinion even if it differs with ours, as long as it comes within the framework of commitment to the etiquette of dialogue and difference, away from insults, defamation and slander, a method that contradicts our values, norms and morals. , before it contradicts legal norms, and we always investigate accuracy in transmitting news, and our motto is not important to rush with the most important news to put the right news.