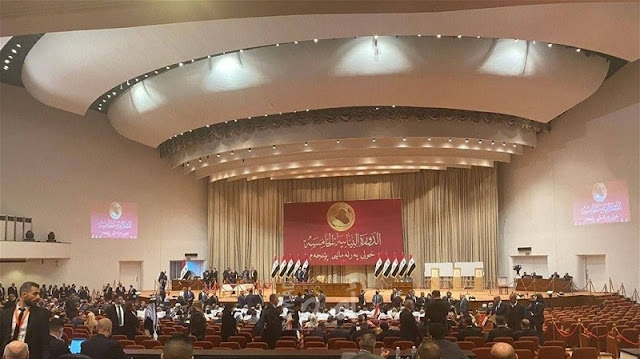 The Iraqi House of Representatives completed the first reading of a proposed law banning normalization and establishing relations with "the Zionist entity".
The details are insane.
The preamble says that it aims to "criminalize normalization with the Zionist entity and prevent the establishment of any diplomatic, political, military, economic or cultural relations" with Israel.
The draft law also includes the criminalization of travel, communicating, establishing relations, and promoting Zionist ideas and principles by any means, whether public or secret, including conferences, gatherings, literature, merchandise, social media and the virtual world.
This proposed law considers all those included in the expression "normalization" and "establishing relations" as a crime punishable by death or life imprisonment.
As paranoid and insane as the law is, the explanations for it are even crazier.
The Minister of Culture, Atef Abu Seif, said that "the Israeli occupation is always trying to penetrate through culture to Arab societies because the conflict with the occupier is over the narrative and identity, and the occupation always seeks to steal the Palestinian land and history."
Abu Seif stressed that "all attempts to occupy Arab consciousness will fail because the depth and rootedness of Arab culture is greater than all the lies and myths that are being marketed."
If Iraqi Arab culture is so strong, then it should be immune to the Zionist lies and attempts at normalization, and there is no reason to pass the law, is there?
The law shows not strength but sheer terror at the loss of the one unifying Arab theme: that Israel is the ultimate evil. It is the legal equivalent to placing one's hands over one's ears and screaming "no no no no NO!"
It is not a law against Israel - it is a law against getting infected with Zionist ideas and thoughts.
It is an attempt to place Iraq in quarantine from ideas that its people might be interested in learning.
Imagine, an Iraqi can be imprisoned for chatting with a Zionist on Twitter. Which means if you don't like a particular Iraqi, just email him or her a copy of an Israeli newspaper.
This draft law is a complete violation of freedom of speech and freedom of thought. I have a feeling that Amnesty and Human Rights Watch will not say a single word in opposition to this. Their hate for Israel is far greater than their interest in human rights.
On a more serious note, I have about 150 Twitter followers from Iraq. I hope that they stay safe.
Elder of Ziyon at Thursday, May 12, 2022
‹
›
Home
View web version