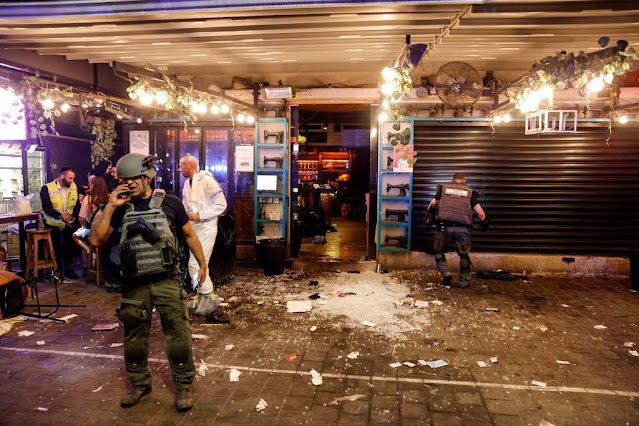 Last year, Human Rights Watch issued a perfunctory report condemning Gaza terror groups for shooting rockets at civilian targets to pretend to be even handed amongst their blizzard of anti-Israel reports.

Hamas and Islamic JIhad were upset that HRW, which normally is in perfect sync with the terror groups in blaming everything on Israel. So they issued statements about how much they abhor violence against civilians. Hamas:

The movement reiterates that it adheres to and respects international law and international humanitarian law—we are keen on conducting our activities in line with these laws.

Similarly, an Islamic Jihad spokesperson claimed "the resistance avoids civilian places" because of its adherence to international law.

And when Palestinians undeniably target Jewish civilians on Thursday, their concern over civilian lives turns into glee at the murder of civilians.

The Islamic Resistance Movement Hamas blessed the heroic operation that took place this evening, in the middle of the so-called "Tel Aviv", which led to the killing of a number of occupying soldiers and Zionist settlers, considering it a natural and legitimate response to the escalation of the occupation's crimes against our people and our land, Jerusalem and Al-Aqsa Mosque.

Similarly, Islamic Jihad said that every "Zionist" is a target:

“What can the criminal Zionist occupation expect from our people when it tampers with Palestinian blood, commits crimes against its sons, Judaizes its sanctities, besieges, arrests and destroys, except for more resistance operations and more clashes in every spot occupied by the Zionists of our land ?”

And their words to the Western media only eight months ago about how they don't want to target civilians? Well, one is allowed to lie for one's holy cause.