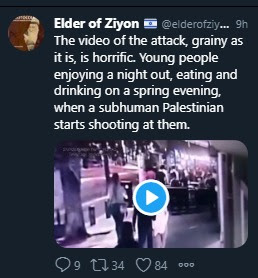 The video is not clear enough to actually see any shooting or victims, only the panic of the young people enjoying an evening out. I would never post anything that shows the victims (the way Palestinians love to.)

Here  is the video:

Violating our rules against hateful conduct.

You may not promote violence against, threaten, or harass other people on the basis of race, ethnicity, national origin, sexual orientation, gender, gender identity, religious affiliation, age, disability, or serious disease.

Meanwhile, tweets like this that actually celebrate murder are all over the place:

UPDATE: Within minutes of my reporting this tweet celebrating murders, Twitter managed to review it and declare it kosher:

Please tweet this - because I can't. (I did appeal.)