When Jewish groups protested, Geico backed down, with this statement: 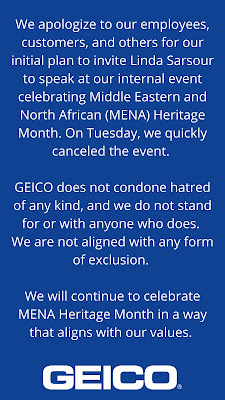 Given Sarsour's record - supporting antisemite Louis Farrakhan, invoking "Jewish supremacy," saying Zionists cannot be feminists, and supporting Palestinian terrorist Rasmea Odeh, this is an accurate representation of her views. Beyond that, she has publicly praised a misogynist and anti-gay Muslim cleric, Imam Siraj Wahhaj, as her mentor.

Sarsour is no role model for Muslims. She is filled with hate, and Geico was correct in uninviting her.

But now she is very upset, and her disingenuous argument is that Geico is effectively Islamophobic for this cancellation, placing herself as being synonymous with Islam itself. Here's most of an email she sent out to her MPower Change mailing list: (A shorter version demanding Geico apologize is here.)

I’m sending this message to you with a heavy heart, shortly after beginning my daily fast for Ramadan.

Just before Ramadan began, GEICO Insurance invited me to meet and talk with their Diversity, Equity and Inclusion team. I was happy to discuss Arab-American heritage, especially during the holy month of Ramadan.

Then, yesterday, in the middle of my fast for Ramadan two things happened that shocked me — and broke my heart.

I got the news that GEICO — the world-famous insurance company worth tens of billions of dollars — had decided to abruptly cancel the event with me.

Then, GEICO publicly justified their decision by smearing my work advocating for marginalized communities as “hatred” across their social media accounts.

Let GEICO know you demand they do the right thing and rescind their statement & apologize to their Muslim, Arab, and Palestinian employees and customers. This is an all-hands-on-deck moment to push back against anti-Arab and Islamophobic hate.

On Twitter? Tweet at GEICO to let them know that we won’t back down from anti-Arab, anti-Muslim discrimination.

If one of the largest companies in the world can get away with smearing advocacy for U.S. Muslims, Arab Americans and Palestinian-Americans as “hatred,” all in the midst of Ramadan, then we are in very, very big trouble.

GEICO decided they were more comfortable publicly vilifying and dehumanizing a prominent advocate for Arab Americans, U.S. Muslims, Palestinians and other marginalized communities — caving at the first sign of disapproval from anti-Muslim, anti-Arab and anti-Palestinian voices — than simply having a conversation with me.

GEICO thought they could silence me from talking to their staff about fighting bigotry, racism and Islamophobia.

They were wrong about that.

But if we want GEICO to realize that there’s a real price to be paid for ignoring or antagonizing millions of people — U.S. Muslims, Arab-Americans, and the righteous allies who organize alongside us — then we need to be as loud as possible, right now.

P.S. This latest attack on the Muslim community reminds me of how important our Muslim-led organizing work with marginalized communities is...

Of course Geico didn't say or imply anything negative about Muslims. There are plenty of wonderful non-bigoted Muslims they can invite to speak to them - and they probably did exactly that after this incident.

Sarsour is so full of herself that she is pretending that she represents Islam itself. And her repeated references to Ramadan are meant to imply that Geico deliberately chose to disrespect a Muslim "leader" during their holy month. 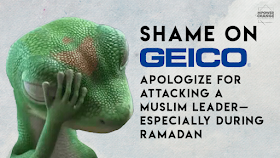 Funny, I didn't hear her say anything about Muslims attacking Jews in Israel during the "holy month of Ramadan." Her interest in Ramadan's holiness is more that a little self-serving.

And who exactly does she lead, anyway?

Sarsour is saying that Geico, by canceling the speech of someone who supports Islamic antisemitism, homophobia and hate for women, is really attacking Islam.

If that's true, Linda Sarsour is Islamophobic herself.

Sarsour's supporters of course are circling around and mimicking her absurd charges. CAIR and other hate groups issued a statement saying, "GEICO’s defamatory attack on Linda Sarsour is an attack on all Americans who dare to criticize the Israeli government and other human rights violators." One of her fans said that the cancellation is a "violation of human rights."

Nothing is too absurd for supporters of terror to say.