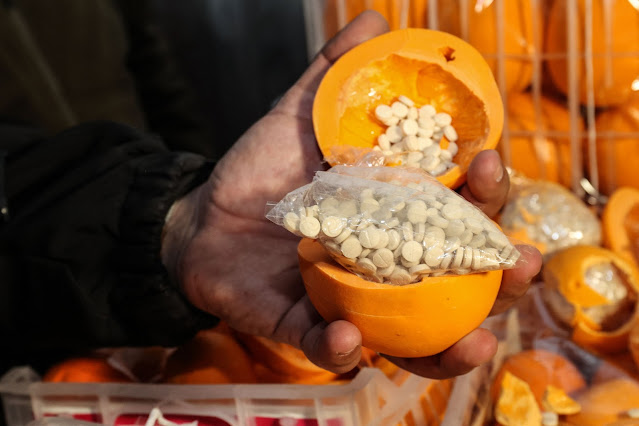 A new report by the New Lines Institute details the drug trade in the Middle East, especially Captagon, an amphetamine-like stimulant which has become a $5.7 billion industry centered in Syria.

Until recently, its main market has been Gulf states, but now the drug is becoming popular in Mediterranean regions.

While the report reveals how Bashar al-Assad's family and Syrian officials are heavily involved in the production and distribution of Captagon, it also shows that Hezbollah is a key player:

Assisting the [Syrian] government in protecting, trafficking, distributing, and facilitating captagon shipments is a network of state-aligned proxy militias, including Lebanon’s Hezbollah, that profit from port and cross-border taxation and provide an essential security umbrella to their operations.  Many recent captagon seizures have been accompanied by modest amounts of hashish harvested from Lebanon’s Bekaa Valley, pointing to additional involvement and coordination with Hezbollah, an active participant in what the U.N. estimated in 2016 as the world’s third-largest cannabis producing country.

With its history of controlling Lebanese cannabis production and smuggling out of the southern Bekaa Valley, Hezbollah has seemingly served an important supporting role in the captagon trade. Hezbollah’s technical expertise in drug smuggling, along with the number of potential partner criminal organizations in the Middle East, Europe, and North Africa, has aided the Syrian government’s efforts to run an industrial-sized captagon market.  The relationship builds upon a dynamic that has existed since the Lebanese civil war, where Syrian political, military, and intelligence officials collaborated with Hezbollah in cannabis cultivation and production, activities that led the U.S. Department of State to designate Syria as a narco-state until the Pax Syriana era.

This dynamic has played out in the captagon trade, with Hezbollah supporting smuggling efforts through overland routes and by sea, helping dispatch industrial-sized, containerized captagon shipments from Lebanese ports in Tripoli and Beirut, as well as enabling Lebanese ports to serve as trans-shipment sites for captagon shipments dispatched from Tartus and Latakia. Through the Qalamoun region, Hezbollah has protected transit routes between Syria and Lebanon and provided an accommodating climate for the trade in illicit arms, drugs, and chemical precursors, as the group has used its political leverage and security networks within Lebanon to enable uninterrupted illicit flows. Hezbollah fighters and other Iran-aligned proxy networks have reportedly been seen assisting the Fourth Division in controlling and securing key areas of concentrated captagon production and smuggling at key checkpoints along the Damascus-Amman highway, the western countryside of Daraa governorate, the Nassib border crossing, and the Lajat area, and they have been spotted visiting captagon factories in Syria such as in Daraa al-Balad.

Hezbollah also has facilitated trafficking in Shiite-majority areas under its control, such as the Bekaa Valley. The group had reportedly been associated with 60 small-scale captagon production facilities in 2017, but that number had decreased by 2021, when Lebanese Brig. Gen. Adel Machmouchi estimated 20 small-scale captagon factories in hubs in Baalbek, Hermel, and other areas along the Lebanese-Syrian border. The group has also been affiliated with running small-scale captagon laboratories and workshops inside Syria, with alleged involvement in operating and protecting facilities in Zabadani, Bloudan, Serghaya, Yabrud, al-Qusayr, western al-Qalamoun, near the Dabaa military airfield, and Qunaytirah.

The supposedly religious Shiites of Hezbollah seem to have no problem producing and distributing a drug that they admit is against Islamic law - they simply deny that they are involved. This report shows that they are lying.