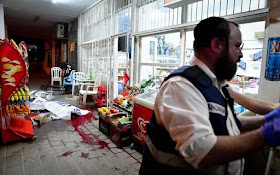 As documented by Joe Truzman, here is a list of Palestinian groups that praised the terror attack in Bnei Brak yesterday:
Hamas
Palestinian Islamic Jihad
PFLP
DFLP
PFLP-GC
Al-Aqsa Martyrs Brigades (Fatah)
Mujahideen Brigades
Popular Resistance Committees
Popular Resistance Movement
This is besides Hezbollah.
Mahmoud Abbas' half-hearted condemnation of the attack reportedly came after Israel sent a strong message to him to do so.  As far as I can tell, this is obvious to the Palestinian media, none of which have condemned the attack, even the media that slavishly echoes the official Palestinian position.