Another group, the International Human Rights Clinic at Harvard Law School, tries - and fails - to define "apartheid" to apply to Israel 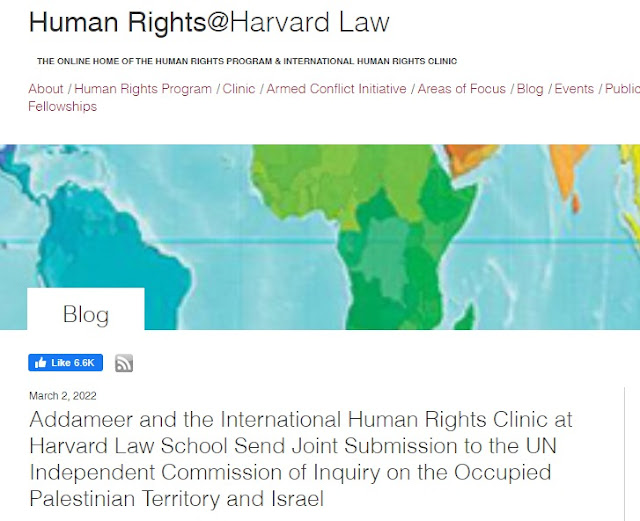 In Bari Weiss' latest Common Sense newsletter, Aaron Sibarium reports on how the legal system in the United States is being taken over by totalitarian thinking, where bedrock legal concepts such as energetically representing both sides are being subsumed under progressive ideology. He details how this thinking is now mainstream at elite law schools.
Harvard Law School's Human Rights Clinic seems to prove this point.
After Human Rights Watch and Amnesty International tried and failed to twist the legal definition of apartheid to somehow include Israeli actions, the International Human Rights Clinic at Harvard Law School has added a couple more arguments all meant to twist the law to obtain a pre-determined goal. Objectivity is the furthest thing from the minds of these law students.
That Clinic partnered with Palestinian NGO Addameer to submit to the newest UN kangaroo court evidence that Israel is guilty of apartheid.
As with all of these bogus arguments, they must prove that Palestinians are a different "race" from Jews under international law because every definition of apartheid refers to discrimination based on race. The fact that this argument mirrors that of Nazi Germany does not seem to bother these paragons of progressive legal justice.
Harvard's Clinic includes the discredited HRW argument that quotes the  International Convention on the Elimination of All Forms of Racial Discrimination that defines “racial discrimination” as “any distinction, exclusion, restriction or preference based on race, colour, descent or national or ethnic origin." And just as with HRW, they pointedly exclude the very next paragraph of the ICERD: "This Convention shall not apply to distinctions, exclusions, restrictions or preferences made by a State Party to this Convention between citizens and non-citizens."

This submission's scope is limited to saying that Israel practices apartheid against Palestinians in the territories, not in Israel proper. The very existence of Israeli Arabs who enjoy equal rights in Israel who are clearly of the same race/ethnicity/national group as Palestinian Arabs itself disproves the theory. It also proves that any discrimination against Palestinian Arab non-citizens is the result of them not being citizens, not because they are Arab. The ICERD's words note this as clearly as possible.
Yet these legal experts do not mention that part of the ICERD - because they are not advocating for the law, but twisting the law as a tool to advocate against Israel.
But the Harvard team, sensing that this argument is weak, tries another in the never-ending quest to find a way to shoehorn the definition of apartheid to apply to Israel:

Several international tribunals have addressed the definition of “racial group” in the context of genocide, persecution, and other war crimes, which were based on harms perpetrated by one racial group against another.[27] International tribunals—notably the International Criminal Tribunal for Rwanda (ICTR) and the International Criminal Tribunal for the former Yugoslavia (ICTY)—have found that determination of race was challenging and that no clear scientific or objective method could be used to determine whether someone belonged to a particular racial group.[28] In Rutaganda, the ICTR held that group membership under the Genocide Convention was to be understood as “a subjective rather than an objective concept” where “the victim is perceived by the perpetrator as belonging to a group slated for destruction.”[29] In Blagojevich and Jokic, the ICTY held that “a national, ethnical, racial or religious group is identified by using as criterion the stigmatisation of the group, notably by the perpetrators of the crime, on the basis of its perceived national, ethnical, racial or religious characteristics.”[30]  Thus, in analyzing the meaning of racial group for purposes of the prohibition of apartheid, a subjective approach is appropriate.

ICERD, art. 1. General Recommendation VIII (1990) of the Committee on the Elimination of Racial Discrimination further clarifies that the identification of individuals as members of a particular social or ethnic group or groups shall be based upon self-identification.

This would mean that as long as Palestinians identify as members of a social or ethnic group, and that social/ethnic groups can be considered racial groups, then discrimination against them would be racism.
But the actual text quoted includes an important clause that the Harvard team doesn't want readers to know:

The Committee on the Elimination of Racial Discrimination,
Having considered reports from States parties concerning information about the ways in which individuals are identified as being members of a particular racial or ethnic group or groups,
Is of the opinion that such identification shall, if no justification exists to the contrary, be based upon self-identification by the individual concerned.

Why would they leave that bolded part out? Because every single example of discrimination that they list in their submission by Israel is more easily explained by the fact that Palestinians aren't citizens of Israel than by them being part of a racial group! Of course justification exists to the contrary of the "self-identification" criterion!
And of course Palestinians will define themselves by whatever criteria is needed to damn and ultimately destroy Israel, which is the entire point of Palestinian nationalism. After all, Palestinians were never distinct from other Arabs, nationally or ethnically, until (at the very earliest) the mid-20th century. This is another justification to the contrary of allowing self-identification to determine what would normally be objective criteria. Are Palestinians named "al-Masry" or "al-Kurd" not ethnically Egyptian or Kurdish?
In this case, as with Amnesty and Human Rights Watch, legal teams deliberately twist and ignore the parts of the proof texts (as well as historical fact and all other counter-evidence) that disprove their case. Which proves yet again that these are not serious legal analyses of apartheid, but attempts to use legal obfuscation to make tendentious and ultimately false legal arguments.
All to try to prove "Jewish supremacism."
This is antisemitism dressed up in legalese. And this is what Harvard Law School is teaching.