Breitbart publishes an excerpt from former US ambassador to Israel's David Friedman's upcoming book,  Sledgehammer: How Breaking with the Past Brought Peace to the Middle East.

Word of my stubborn insistence on standing with our ally Israel had now circulated widely within the State Department. Another senior staffer decided to call me and offer the following advice: “Mr. Ambassador, don’t be so Jewish.”

“Don’t be so Jewish. You represent the United States of America. Tone down the Judaism in your work.”

Don’t be so Jewish.

I was furious. “Do you think I am under any disillusion as to who I represent? I’m not a politically correct person but I have to ask you, why do the laws of political correctness not apply to Jews?”

“Just a free word of advice.” Worth the price.

This is a shocking anecdote, but only because the State Department staffer said out loud what so many believe.
The US State Department's Middle East history has been predominantly pro-Arab and antisemitic/anti-Zionist since the mid-19th century. A generation of diplomats came from the children of American missionaries to the Arab world who grew up with the endemic antisemitism of both Christianity and the Arab world.
Perhaps the best example of the State Department's embedded antisemitism came after the Balfour Declaration. Secretary of State Robert Lansing wrote to President Woodrow Wilson his opposition to the idea, claiming realpolitik reasons: "Many Christian sects and individuals would undoubtedly resent turning the Holy Land over to the absolute control of the race credited with the death of Christ." Wilson ignored him.
Similarly, Harry Truman overrode the State Department's objections to recognizing Israel in 1948.
As offensive as this statement was, we see that level of low-grade antisemitism all the time, everywhere. Antisemitic attacks in the United States in recent years only prompt broad outrage when the victims look like "normal" Americans. People love to write articles about how awful the Pittsburgh or Colleyville attacks were, but Jersey City and Monsey and daily attacks in Brooklyn do not get anywhere near the coverage.
Because the victims are too Jewish.
The same people - often Jews themselves - who are up in arms about attacks on Asians and Muslims generally ignore attacks on identifiably religious Jews, even though they happen more often. I just listed a number of such attacks in New Jersey, New York, Chicago and London only in the past week - and the left-wing Jews are all but silent. Because while they care so much about attacks on most people who don't look like themselves, when it comes to Jews, they only care when they can picture themselves as potential victims.
They can walk in Williamsburg or Boro Park and not worry about someone randomly attacking them. 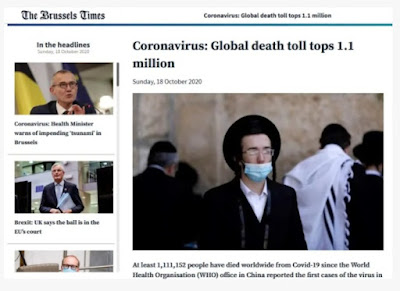 In the first months of Covid-19, religious Jews were the scapegoats in the media and in New York City. They were singled out for insults and rules were made for religious Jewish gatherings that did not apply to secular gatherings.
The most egregious example of anti-religious antisemitism happened during the Crown Heights pogroms in 1991, when days of Blacks attacking Jews was reported as "clashes between two groups" because no one wants to appear racist - and no one cares about Jews being attacked when they insist on dressing in identifiably Jewish clothing.
The same thing applies to Israel. How many times have we heard insults about "religious settlers" and "ultra-Orthodox fanatics" in Israel?  It is part of the normal discourse, and no one is even embarrassed to say such phrases.
People want a secular Israel, they want kibbutzim and Ben Gurion and Tel Aviv. They don't want Jews who assert their religious rights. They demand Jews cede the Temple Mount and Tomb of the Patriarchs to the Muslims, who insist that no Jews step foot into areas they built on top of Jewish holy places.
It isn't only the State Department. It is the media, it is academia, it is members of think-tanks. The attitude of "don't be so Jewish" is entrenched, and people who aren't religious are rarely tuned into how offensive and entrenched this attitude is. Jews are wonderful - as long as they aren't too Jewy.
In the end, Friedman was vindicated. His unabashed Judaism did not hurt peace - it helped. Arab leaders respect religious Jews more than secular Jews because they can relate better to them.
It was the yarmulka-wearing Jews who brokered peace with Morocco, Bahrain and the UAE. It is a yarmulka-wearing Jew who is negotiating Lebanese maritime border disputes with Israel. People who study how Jacob prepared for his meeting with Esau seem to be better negotiators than those who take graduate courses in political science and work as diplomats for decades.
The attitude of "don't be so Jewish" is everywhere, and it is pure antisemitism.