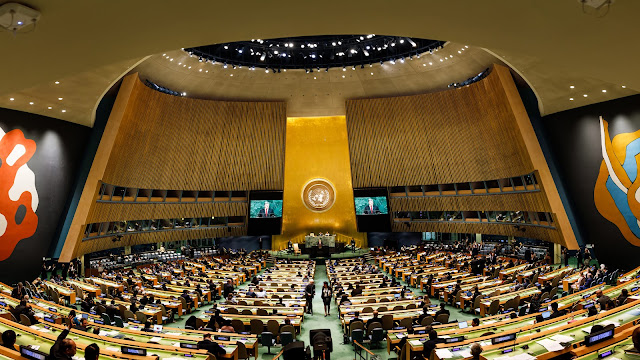 • We affirm that the Palestinian refugee issue is at the heart of the Palestinian cause. We uphold the inherent and inalienable right of generations of Palestinian refugees and their descendants to return to the homes from which they wer e displaced, in accordance with international resolutions, and in particular General Assembly resolution 194 (III) and the Arab Peace Initiative.
• We condemn and reject any attempts by any party to nullify Palestinian refugees’ right of return or to distort the refugee issue by attempting to resettle them, dismantle the United Nations Relief and Works Agency for Palestine Refugees in the Near East (UNRWA), stop its funding or deprive future generations of their right of return through a so-called redefinition of their legal status.

Like the others, this has nothing to do with the resolution. It is a call for Israel to allow itself to be destroyed with an influx of millions of fake refugees.
Bahrain did not have to submit anything. But it chose to emphasize the false "right of return."
I can imagine that this was a response to Palestinian rage at their normalization agreement with Israel, a message that "hey, we are still on your side." Even so, given that they are now at peace with Israel, this is concerning.