France moves to outlaw pro-terror Palestinian groups. They respond that calling for murdering Jews is a "human right."

The French Minister of the Interior Gérald Darmanin is calling for the dissolution of two hate organizations in France, the "Palestine Vaincra" collective and of the "Palestine Action Committee."
According to the Ministry of the Interior, the Palestine Action Committee is supposed to defend the rights of the Palestinians, but in fact relays press releases from Hamas, Islamic Jihad and Hezbollah, and reports on their actions, according to the authorities. The Ministry calls for its dissolution for incitement to hatred, violence, or discrimination and provocation to terrorist acts.
Similarly, Palestine Vaincra explicitly supports terror attacks on Israeli Jews. Here's an autotranslated screenshot of one of their articles that actually celebrates Palestinian support for shooting rockets at Jewish civilians: 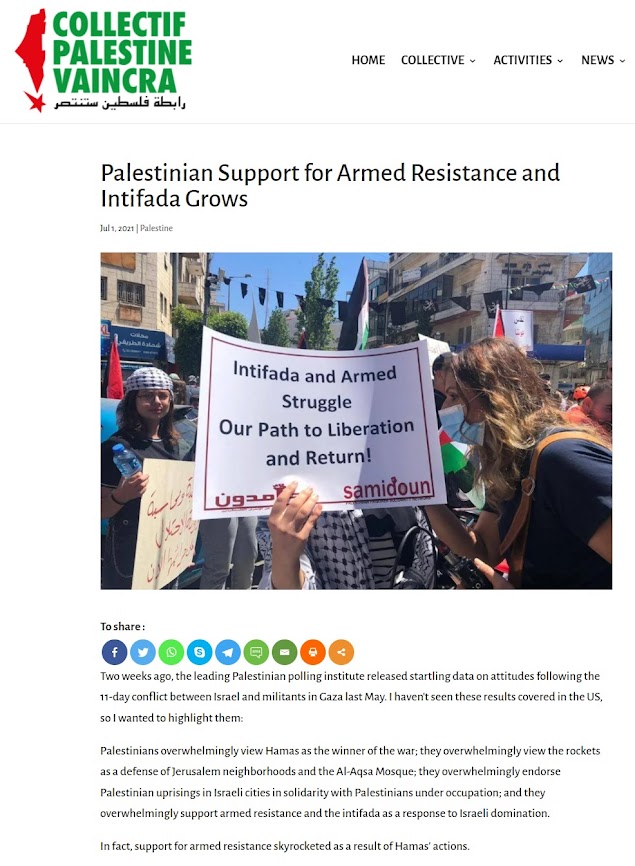 How much more explicit can they be in advocating murdering Jews?
Palestine Vaincra is part of the Samidoun network, which issued a truly Orwellian press release complaining about how their support and incitement for murdering Jews is a human right.

This blatant assault on freedom of expression and association once again reveals the complete disregard of the French state for the principles of “human rights” and “democracy” it claims to support.
When a group is “dissolved” by the state, it may not hold meetings or organize events. Material bearing the group’s name and logo is banned, and members and activists who continue to organize in the name of the group can be fined and even imprisoned. This is shameless political repression carried out by an imperialist power that claims to defend human rights while trampling atop them.
This action blatantly flies in the face of France’s obligations under international law, the European Charter of Human Rights and the International Covenant on Civil and Political Rights. It is a shameless attack on freedom of expression and association and must be confronted as such.

We've seen this sort of argument before, that advocating for killing Jews is a human right. It only makes sense if the "human rights activists" do not regard Jews as being human and deserving of rights to begin with.
Incitement is not free speech. These Palestinian groups are not defending Palestinian human rights but call for Palestinians to have the "right" to target and murder Jews.
In a normal universe, major human rights organizations would denounce how their cause is being hijacked by people who clearly oppose human  rights and celebrate terrorists and murderers. But we live in a universe where "human rights" organizations like Amnesty and Human Rights Watch show their full support and partnership with groups like Samidoun, Palestine Vaincra and the Palestine Action Committee.