Al-Haq has teamed up with Forensic Architecture, a notoriously biased anti-Israel organization that uses cutting edge research techniques to "prove" whatever it wants to prove. From the Al Haq press release:

On 23 February 2022, Al-Haq launched its report titled “Cultural Apartheid, Israel’s Erasure of Palestinian Heritage in Gaza”. The report builds from an investigation by the London-based research agency Forensic Architecture using advanced technologies and ‘open-source’ techniques to reconstruct one of the most significant archaeological sites in the occupied Gaza Strip. The report draws on Israel’s strategic bombing of the Gaza coastline to exemplify the erasure of Palestinian cultural heritage and the denial of the relevant human rights. Israel’s bombardments not only breach the principle of military necessity in violation of the laws of armed conflict, but also aim at gradually erasing Palestinian cultural heritage to deny the Palestinian people of their right to self-determination over their cultural resources, and by extension threatens their existence as a people. Such bombings are a gross violation of the Rome Statute, constituting war crimes, and crimes against humanity.
In the report, Al-Haq outlines that the bombing of the site may amount to a war crime and contributes to the crime against humanity of apartheid.[1] The targeting of Palestinian cultural heritage, fundamentally affects the core of their identity and existence as a people. For example, the International Criminal Court underlines the nexus between destruction of cultural heritage and crimes against humanity, especially when the former occurs within the context of an attack against the civilian population, forms part of a state policy and is carried out in a widespread or systematic manner.[2] Additionally, under the Rome Statute, the crime of apartheid when committed as part of a widespread or systematic attack against the civilian population, with knowledge of the attack, amounts to a crime against humanity.[3]

This is utter garbage.
Israel never targets "cultural heritage" sites when Hamas starts its wars. Israel targets terrorists.
And terrorists tend to be in some "cultural heritage" areas. After all, they are open spaces that are ideal for shooting rockets.
The Forensics Architecture team spent lots of time and money to document Israel's bombing of the Roman-era ruins near the Shati camp. But not once did they - or Al Haq - mention that terrorists both shoot rockets from that area, and that they have even been known to shoot rockets accidentally to that area.
The areas marked by Forensics Architecture are north of the Shati camp.

Here's that same spot from a Google Maps satellite image: 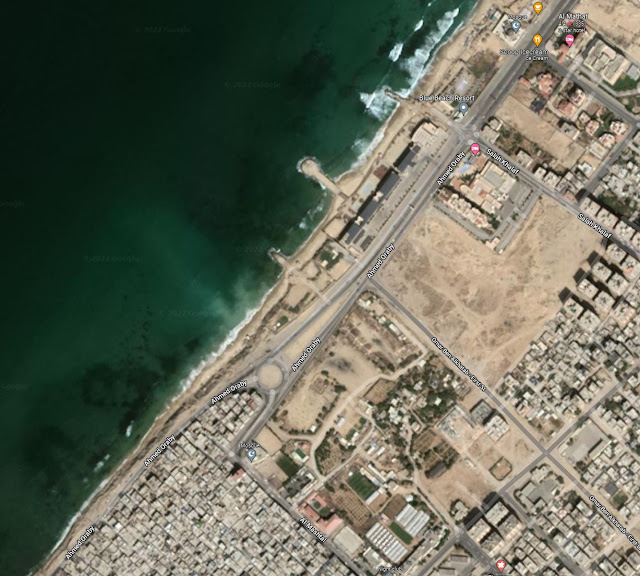 Look at that open space, just begging to be used for rocket launches. And which just happen to be on top of these old Roman and Byzantine ruins.  (Screenshot from Forensic Architecture.) 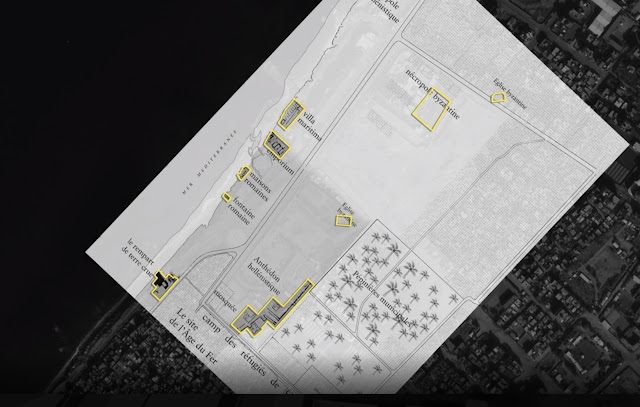 Palestinians shoot rockets from whatever open areas they can find that have unimpeded paths to Israel. Favorite launching sites include cemeteries for that very reason. The open areas shown here are ideal for rocket launches.
In 2014, the Al Mezan center admitted that there was a "military" site north of Shati, documented in Amnesty's Gaza Platform: 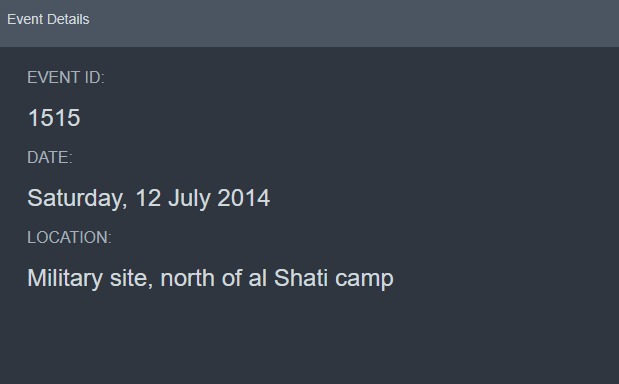 This Gaza Platform, which I've shown is consistently filled with false and provably biased data against Israel, was designed by this same Forensic Architecture. When it grudgingly admits a site was military - believe it.
More about Shati:
Senior Hamas members live in or near Shati. One was once bombed by a rival Hamas group. The Gaza Platform notes that Hamas leader Mahmoud Zahar lived in Shati.
In 2014, a misfired terror rocket fell on the Shati camp, killing many children. Hamas cleaned up the site so no one could tell that it wasn't an Israeli rocket. Was that near an archaeological site? Maybe. It almost certainly left a crater. Forensics Architecture sure won't report it, even as they tacitly admit that parts of the Shati camp, like a sports stadium, are themselves built on top of some of this priceless cultural heritage they pretend to care so much about.
At 5:20 of their video, they show that buildings have been built between 2014 and 2018 directly on top of what was once a Roman-era city wall.
2014 showing outline of visible Roman wall: 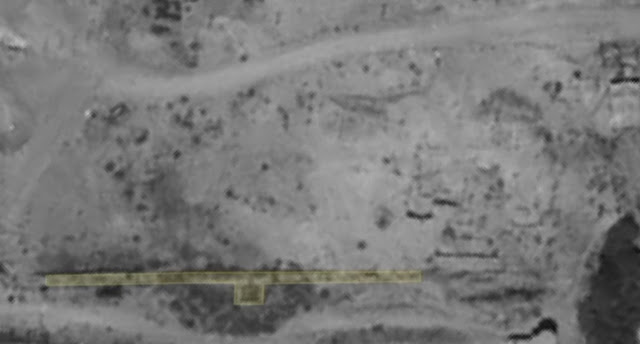 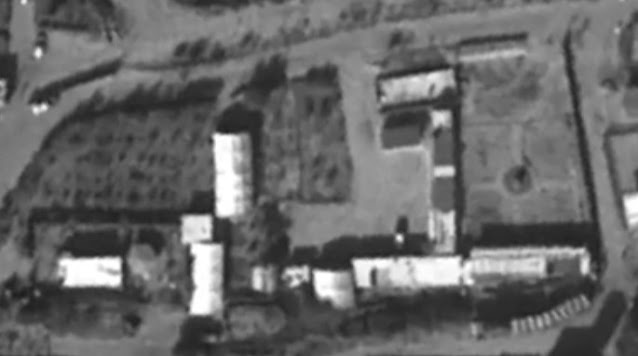 But for some strange reason,  these NGOs who claim to care so damn much about Palestinian cultural heritage don't say a word about how Hamas is directly erasing that heritage! (All of the "Palestinian" heritage sites mentioned in this report are actually Greek and Roman. But Hamas has destroyed Canaanite sites as well, whom Palestinians claim as their ancestors.)
In 2021, the IDF published a map showing where Hamas rockets were shot from and where they landed. While the resolution of the image isn't very good, it is obvious that some of the rockets came from, and landed in, the very areas that Al Haq is now pretending were purposefully bombed by Israel. (I added an arrow to point to where Shati is.) 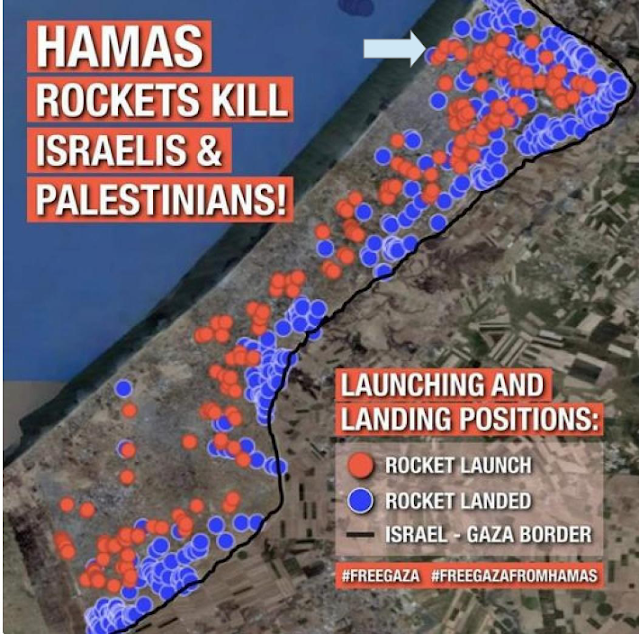 The IDF published a similar map during the initial stages of the 2014 warm showing again that Hamas fires (and explodes) rockets in the very area that Al Haq and Forensics Architecture are claiming Israel targets archaeology: 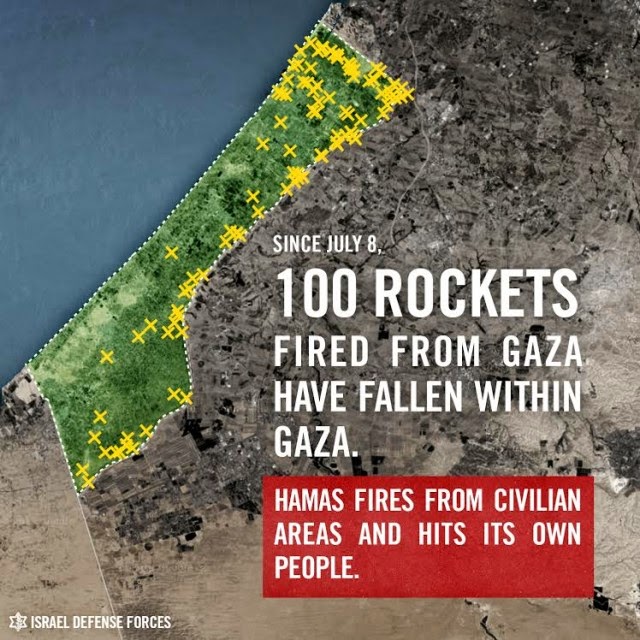 Throughout the Forensics Architecture video, and the Al Haq report, not once is it mentioned that terrorist groups were ever in those areas. Not once do they even consider that the IDF was aiming at military targets. The words "rocket" or "Qassam" or "militant" or "resistance" are not mentioned once, and neither was "Hamas" mentioned in the report's body (one footnote referred to a story with Hamas in the title.)  And not once do they mention that Hamas is knowingly destroying priceless archaeological treasures - which has happened many times, not just here.
This is not just bias. This is purposeful whitewashing of the truth.
Because for all the high tech, 3D models that Forensics Architecture generates, truth is the last thing it is interested in. The report and video are intended from the outset to be pure anti-Israel propaganda.
If they would even briefly mention that, sure, there are "resistance sites" in those areas - legitimate military targets - then their entire thesis of Israel violating international law disappears. It is obvious that Israel would prefer to target weapons caches, command and control centers and rocket launch sites over wasting expensive missiles on old Roman ruins at or near a beach.
There is literally no evidence that Israel targets these areas to erase Palestinian culture and plenty of evidence that there were valid military targets there. And even more evidence that Hamas doesn't care at all about Palestinian "cultural heritage."  By not mentioning that, this proves that these two NGOs also don't care about cultural heritage, except as a weapon to attack Israel.
This is the state of anti-Israel bigotry. Package up half-truths, give only one possible explanation no matter how farfetched it is, and know that the audience will lap it up.
They know they are lying. They know that they are misleading their readers. And they do it on purpose.