When was the term "holocaust" first used for the Holocaust?

In 2015, The New Republic published an article about the etymology of the word "Holocaust" as it is currently used.

There has long been a rigorous debate among etymologists and historians as to when the lowercased “holocaust,” generically defined as a large-scale calamity usually involving fire, became the proper noun used specifically to name the period of Nazi genocide against European Jews. Yet there is little debate that that formalization occurred years after the war’s end.
...According to a 2005 Jewish Forward piece, a top rabbi in what was then Palestine wrote to a colleague in a telegram about the need for a “day of mourning throughout [the] world for holocaust synagogues [in] Germany” after Kristallnacht, a November 1938 night of terror in which Jewish homes were ransacked and windows broken across Germany.
There were smatterings of usage prior to World War II to refer to mass slaughters, too, including with regard to the Armenian Genocide. And a 1943 New York Times piece about talks regarding Palestine references “the hundreds and thousands of European Jews still surviving the Nazi holocaust.”
Yet for decades after the war, the genocide lacked any formal title in English except, perhaps, “The Final Solution,” the term the Nazis used. In Hebrew, the calamity quickly became known as “Shoah,” which means “the catastrophe.” But it wasn’t until the 1960s that scholars and writers began using the term “Holocaust,” and it took the 1978 TV film Holocaust, starring Meryl Streep, to push it into widespread use.

The 1938 use of the word is interesting, but this article seems to say that the May 23, 1943 New York Times article is one of the earliest uses of that word specifically to refer to the genocide of Jews in Europe.
I have found an earlier mention.
The Pensacola Journal, March 13, 1943, had an editorial about a mass meeting by Jews in New York to urge the nascent United Nations to publicly deplore the extermination of Jews. The final statement of the meeting included the word "holocaust:" 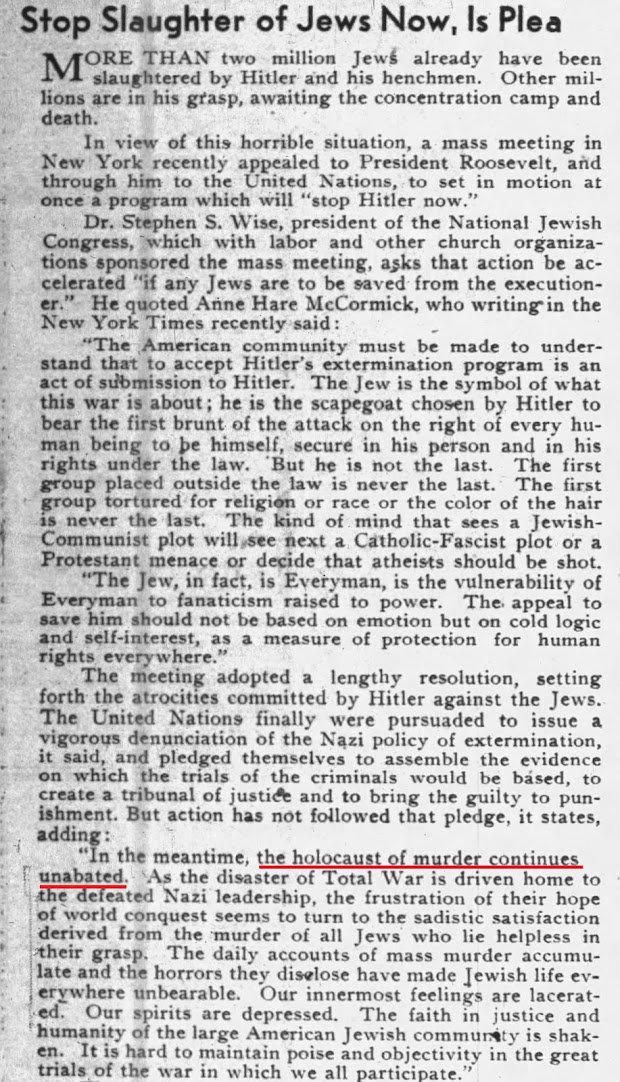 I had no luck finding the entire statement from the meeting, although the resolutions are reproduced in this same op-ed.
The word had been used often before the Holocaust. A Boston fire in November, 1942 that killed 492 people was universally referred to as a "holocaust" in the months afterwards. But this is the earliest I can find the word "holocaust" referring to the murder of millions of Jews in Europe.